As part of the energy revolution, which is driven primarily by unconventional oil&gas resources, serious geopolitical reshuffling will occur soon around  the world. Contrary to common belief, shale oil is the prime driver behind this process, rather than the shale gas. The Persian Gulf will be the most affected region, as United States – the largest oil consumer in the world – will rely less and less on imports from the Middle East countries. This will entail far reaching geopolitical consequences.

Energy revolution in the Northern Hemisphere

The Western Hemisphere is now seeing a dramatic increase in commercial oil resources (i.e. those than are financially and technically recoverable using existing technology), which with time will translate into higher supply. These are primarily unconventional resources:

Canada was the first country behind the boom with effective oil production from tar sands launched in the late 20th century. With time, production tended to be less and less profitable due to the dwindling oil prices at high costs of production.

Tar sands are a mix of sand, loam, water and bitumen, which must be first separated from the former components and then brought into a liquid form by heating and treatment with solvents. At low oil prices this is not economical, the break-even point is equal to USD 60 for oil barrel.

Consequently, in 1999 official statics of Canada's commercial oil resources were readjusted up from  49.8 Bbbl (billion barrels of oil, equivalent of 6.8 billion tonnes (Bt); all figures are quoted after BP Statistical Review of World Energy 2013, unless otherwise stated) to 181.6 Bbbl (24.8 billion tonnes), putting the Maple Leaf Country an international leader in terms of oil reserves. As of end 2012, Canada's reserves were estimated at 173.9 Bbbl (23.7 billion tonnes).

Like in Canada, Venezuelan heavy and extra-heavy oil resources occur in tar sands. The increase in oil reserves was even more spectacular, although it has attracted much less media coverage, as Venezuela has been for years the world's largest oil exporter. According to 2005 estimates, Venezuela's proven oil reserves were in the order of 80 Bbbl (10.9 billion tonnes). Three years later the estimates were up to 172.6 Bbbl (23.5 Bt) and in 2012 the reserves stood at 297.6 Bbbl (40.6 Bt). According to a majority of leading statistics sources, Venezuela's reserves topped those of Saudi Arabia in the ranking of countries having the largest proven crude oil reserves.

In Mexico, the energy revolution developed in a somewhat different way. For political reasons, private investors, domestic and foreign alike, for decades had no access to the oil sector. As a result, PEMEX (state-owned oil company) fell into technological obsolescence. Since oil export revenues accounted for a large share of the Mexican budget, production was maintained at very high level.

As a result of the inevitable depletion of oil reserves, production fell by 25% and higher oil prices only partially offset a decrease in revenues. Nevertheless, the reserves-to-production ratio (R/P) was not rising. In 2012, proven oil reserves were estimated at as little as 11.4 Bbbl (almost 1.6 Bt). The downfall of the oil sector in Mexico seemed to be more and more probable.

This triggered boisterous discussions on changes in laws and regulations (including the constitution) so as to enable privately-owned businesses to invest and save the PEMEX. The changes are still underway, but even so, oil reserves have been re-estimated. In January 2014, the huge corporation announced that Mexican conventional and unconventional reserves amount to 133 Bbbl  (18.1 Bt).

Offshore oil reserves of Brazil are of a lesser importance, but according to ANP (Agência Nacional do Petróleo, Gás Natural e Biocombustíveis – National Agency for Oil, Natural Gas and Biofuels), over the past ten years estimated oil reserves increased to approx. 28 Bbbl (almost 3.9 Bt).

Even if Brazil and USA (i.e. countries of huge domestic oil consumption, the latter is presented below) are omitted in our comparisons, a massive increase in oil reserves of North America and the Caribbeans is evident, as shown in the following graph: 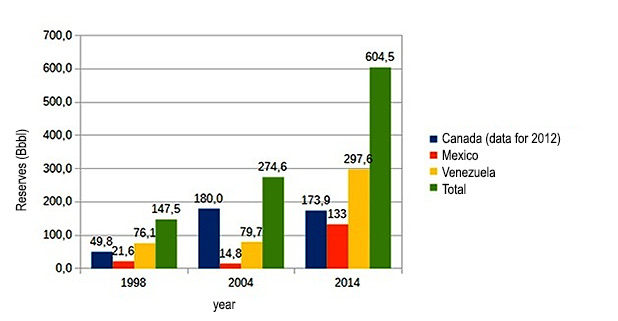 Changes in proven oil reserves of North American and Caribbean countries from 1998 to 2014. Own compilation based on BP Statistical Review of World Energy 2013

Commercial oil reserves of the aforementioned countries increased fourfold (from 147.5 to 604.5 Bbbl) over the past 16 years. Even if the latest revelations from Mexico are not considered and a conservative figure of 11 Bbbl (instead of 133 Bbbl) is retained, the reserves still increase threefold (to 480 Bbbl). The United States are the key oil market for the three countries that cooperate harmoniously with them. Venezuela, which has taken a strong anti-US stance on the onset of the “Bolivarian Revolution”, is an exception in the latter case. This, however, has had no effect on oil trading.

These impressive increases seem bleak, however, if we consider the estimates of potential US shale oil reserves. According to the latest estimates by US Geological Survey, as published on 22 January 2014, the reserves of shale oil plays in Colorado, Wyoming and Utah may amount to as much as 1272 Bbbl bbl (173 Bt) – i.e. four times more than Venezuela holds, 50% more than all Middle East countries combined and approx. 76% of the total commercial reserves in the world that are estimated at 1669 Bbbl. On the basis of these data, International Energy Agency has announced that the USA are to become the largest oil producer worldwide by the end of 2015 and net oil export country by 2020. On 15 February 2014 The Economist published an article on that wealth titled Saudi America. Interestingly enough, Venezuela used to be called “Venezuela Saudita” in the 1970's.

These optimistic estimates may prove well-grounded, insofar as crude oil production is already on the rise in the United States (partly as a result of oil supplies from the Bakken Shale Play in North Dakota), while net imports are falling, partly due to a decrease in US oil consumption. In the period under review, US oil consumption fell from almost 21 Bbbl in the peak year 2005 to 18.5 Bbbl in 2012. Oil production was growing steadily from 7.4 to 8.9 Bbbl, while imports fell from 13.9 Bbbl (again in 2005) to 9.6 Bbbl. US reliance on imported oil decreased from 67% to 52%. These trends are shown in the following graph: 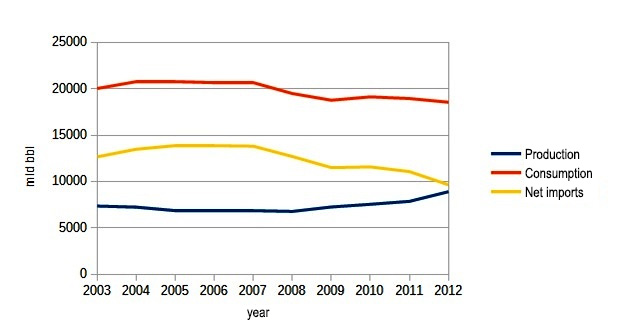 Changes in US oil production, consumption and imports from 2003 to 2012. Own compilation based on BP Statistical Review of World Energy 2013

US oil import mix deserves a closer look, as it conveys a picture of the ongoing geopolitical changes. The volumes of oil imports from North American, Caribbean and Persian Gulf countries are shown in the following graph: 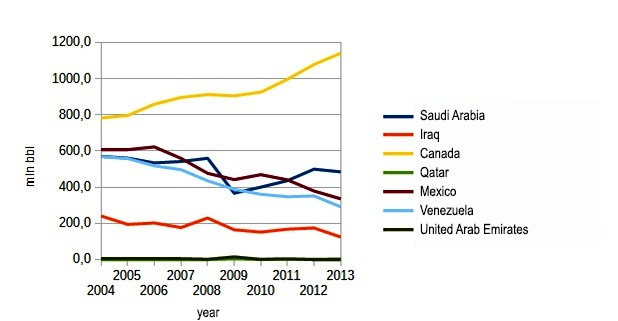 Changes in US oil imports from selected countries, years 2004 to 2013. Own compilation based on BP Statistical Review of World Energy 2013

The graph clearly shows that, in principle, imports from all countries other than Canada are decreasing (as total oil imports decrease). Keeping in mind the constraints that have been mentioned above, it is reasonable to expect that in the case of Mexico the trend can be quite easily reversed, while in Venezuela the constraints are purely ideological and may disappear with  time. On the other hand, as in a long-time perspective the United States will reduce oil imports to accommodate domestic production, politically and economically stable close neighbours, rather than remote exporters, will be more likely to retain their market position.

Considering again the size of commercial reserves, should all estimates prove correct, a radical change in oil geopolitics will occur. North American and Caribbean countries would become international leaders in terms of reserves and, with time, oil production; assuming, of course, that Persian Gulf countries will not see a dramatic increase in their own resources. Changes in commercial oil reserves of both regions, including potential shale oil reserves in the USA, are presented in the following graph: 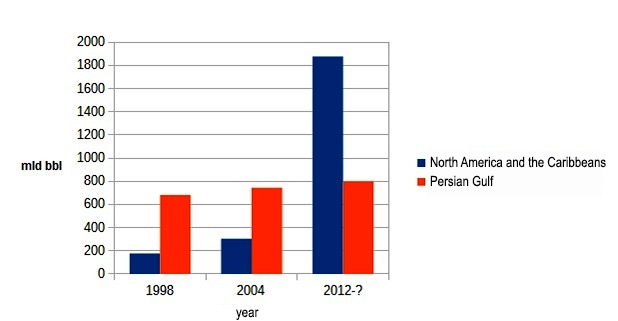 Changes in commercial oil reserves of North America, the Caribbeans and Persian Gulf countries, assuming that production is technologically and economically viable. Own compilation based on US Geological Survey's data

In the next few years the United States may no longer rely on oil imports from Africa, Middle East or Russia. More than that, seeking new oil customers, both USA and neighbouring countries may become their real competitors so that the price of oil will stop to rise or even begin to drop.

Persian Gulf countries will have to take maximum effect of their key strength – a very low cost of oil production (less than USD 4/bbl) – in order to maintain dominant market position in the future.

As already mentioned above, shale oil production will be no longer economical if oil price drops below USD 60 per barrel. Economics will have an effect on geopolitics. From the US perspective, permanent deployment of significant armed forces to the Persian Gulf region will be, at least partly, no longer justified. Quite possibly, the decision to withdraw from Iraq and Afghanistan has an energy implication, the same may be true for relatively strong US engagement in the protest against Russian invasion on Crimea and Ukraine. The risk of energy crisis in North America is fading away – thanks to the revolution in the technology of unconventional oil and gas production.

In this context, the question of Persian Gulf's future is still open. If the United States gradually loose interest in that region, a kind of “security vacuum” may develop therein. This may involve a number of potential scenarios, from destabilization to the rivalry of external partners for released US oil export capacities. Obviously, this will mean a great challenge for Europe that possibly has already taken steps to meet it by expediting negotiations on establishing the Transatlantic Trade and Investment Partnership (TTIP) between the European Union and the United States.