Falling crude prices hit more than just shale oil and gas producers, but the scale of ongoing operations indicates that the shales will survive the period of low prices. The number of active drilling rings in the USA fell by 74 units to 1676 (Baker Hughes RIG COUNT SUMARY of 16 January 2015). The rate of decrease, as reported early in January 2015, is the highest since 2009.

The decrease is most prominent in the case of oil drilling rigs (55 units less). Texas (with its Permian and Eagle Ford formations), where the scale of operations is the largest, is the most affected State. Almost 50% of all active US drilling rigs are operated in Texas.

The count of drilling rigs in operation is the best indicator of crude supply in the nearest future. Less new wells will have a direct effect on the volume of production. Considering productivity curves of existing wells and time that is required for launching new wells, the first data on decreasing crude production in the USA are expected to appear as early as the second quarter of 2015 roku.

Nevertheless, the number of active wells (at about USD 50 per barrel) suggests that the fall may not be as prominent as some expected (and wanted) to see as the price of oil tumbled in the second half of 2014.

Therefore, if the higher output in Saudi Arabia and Saudi's decision to not cut OPEC production was aimed at shale oil producers, then the success proved to be mixed and partial. In fact, falling crude prices hit mostly those OPEC members states where high budgetary needs are combined with high costs of production (e.g. Venezuela), rather than US companies.

Considering its ever improving effectiveness and efficiency, the shale oil and gas industry  seem to be capable of surviving that spectacular downward trend in oil prices, even if some companies will go bankrupt. The expertise in production technology, geology and other aspects will not disappear with them. In a long-term perspective, this should help to withstand the supply pressure on the low price of oil.

Oil importing countries ad all of us, oil consumers, should be happy with that. 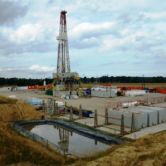