The quantity of available drilling rigs is not expected to hamper shale gas production. An analysis of U.S. production history shows that today much more gas is produced per well than in the beginning of the shale revolution. Moreover, the experience from Utica Region1, the youngest shale gas play in the U.S., clearly demonstrates that even with a limited supply of rigs it is possible to drill a great number of wells and achieve a meaningful output.

Furthermore, the ability to mobilize rigs at drill sites is adequate, as show historic data from both U.S.A. and Poland2. With the expected scale of production in Poland, which today represents only a small fraction of the European and global production, mobilization of or ordering new drilling rigs should not be a problem.
Therefore, the concerns of some analysts and experts who claim that short supply of drilling rigs in Europe (and Poland) may represent an obstacle to shale gas development, are decidedly wrong.

The debate on drilling rigs

The issue of insufficient supply of drilling rigs in Europe has been frequently emphasized in public debates on the shale gas and reports prepared for public administration in European countries. According to some speakers, the small number of rigs may prevent commercial development or substantially delay the appraisal of shale gas resources.

In this context, the article posted in May 2013 at the wnp.pl website “Polish shales: not enough wells, not enough drilling rigs” is symptomatic. The authors argue that “the drilling equipment issue” is the key obstacle to achieving the required scale of drilling operations 3.  Experts have commented on that matter. In an interview granted to RMF FM radio channel  Vladimir Feygin, President of the Institute of Energy and Finance (Moscow) said that drilling availability is the key factor behind the high price of extracted gas 4.

This issue has been addressed by reports of consulting companies, including Ernst&Young report “Shalegas in Europe: revolution or evolution?”. The authors of the report argue that a slow progress of exploratory drilling is caused by inadequate supply of rigs 5. The issue of insufficient availability of drilling equipment was also highlighted by reports prepared for the European Commission 6. Also the report by Joint Research Center of 2012 addressed the issue of drilling rig availability in an insightful and professional way. The authors of the report state that the ability to enhance European drilling capacity will be decisive to effective development of shale gas resources 7.

Why drilling rigs will not be in short supply?

If the situation is that bad, then why the things go well?

The answer to that question would involve a number of important factors. A wrong assessment of the scale of operations and potential demand for drilling rigs until the point of rig mobilization, is the key factor.

The case of Utica Region, the youngest of all U.S. shale gas plays, demonstrates that even at a limited availability of rigs it is possible to achieve a fast and steady increase of production and of the number of wells.

According to data published by Ohio Department for Natural Resources in August 2014, more than 1000 directional wells have been drilled in that State. As late as the fourth quarter of 2010 there were only two wells drilled. At that time, 66 wells were drilled on average in each quarter, and the highest drilling effort was reported in the second quarter of 2013 (140 wells).

Arithmetic mean for 2013 was equal to 110 wells per quarter. The following graph shows the timeline of drilling efforts in the Utica Region (Ohio). 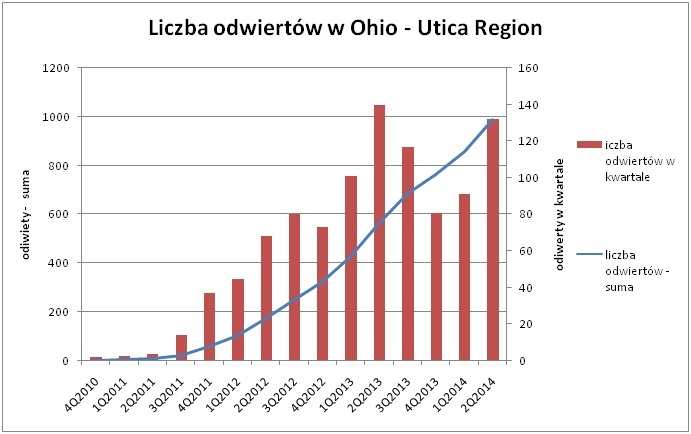 Output has grown to approx. 39 Mcm of gas per day from the fall of 2010 to August 2014, i.e. to more than 14 Bcm per year. This volume is similar to the total annual natural gas consumption in Poland and is four times higher than our gas production 8.

According to Ohio Department of Natural Resources, in the second quarter of 2014 shale gas production was equal to 2.66 Mcm per day, or 10.64 Bcm per year 9. In Poland, the “Utica” scenario would be very optimistic, indeed.

How the demand for drilling rigs looks like under that optimistic scenario?

Here is the answer to the question why drilling rig availability will not mean a harm to the pace of shale gas exploration and appraisal in Poland. In the period considered herein, the number of drilling rigs operated in the Utica Region has never exceeded 30 units, and the top level was reached as late as 2014 (29 units in August 2014) 10.

According to EIA information, average annual output from newly drilled wells was in excess of 43 Mcm of gas plus 43 Mbbl daily per drilling rig. These data clearly demonstrate that a very high (in Polish conditions) output can be achieved and maintained using a limited number of drilling rigs.

Additionally, the extent of the potential “drilling rig supply problem” is mitigated by demand distribution in time. The demand for drilling rigs does not change in an abrupt manner. The case of Utica Region shows that the level of 20 drilling rigs in operation has been achieved almost linearly without any dramatic increase in demand for new drilling rigs 11.

In order to assess the size of the requirements - 29 drilling rigs – it would be of purpose to compare it to the stock of drilling rigs that are operated in other regions of the world. According to Baker Hughes data, 1696 onshore rigs were operated across the U.S.A. at the end of 2013, with almost a half of them (833) located in Texas 12. Still according to Baker Hughes, there were 1025 onshore rigs in other regions of the world, including 87 units in Europe 13. The same source states that 9 drilling rigs were operated at that time in Poland.

Assuming a level of 29 drilling rigs needed in Poland, this would mean that – as of December 2013 – the shortfall is equal to 20 rigs, i.e. 7 ‰ (per mille) of all drilling rigs that are operated worldwide.

The rate of increase in the demand for rigs in Ohio was the highest in 2012, when 13 new units appeared since 1 March 2012 to 1 March 2013. This number represents 4‰ of the global onshore rig stock. Changes in the number of drilling rigs operated in particular regions and countries show that bringing in 10+ rigs is not a problem for the industry.

Moreover, should shale gas production start in Poland and Europe, additional new rigs could be purchased from such manufacturers as Drillmec or Trevi Group in Europe, several U.S. -based manufacturers (e.g. National Oilwell Varco) or sourced from Asia. According to Baker Hughes, only in the United States the stock of drilling rigs increased by 163 units between September 2013 and September 2014. This, combined with additional rigs in Canada (72 units) and other countries worldwide (72 of them) means 260 incremental drilling rigs. An order to purchase 13 new wells (i.e. the highest annual increment in Ohio) would bring the annual increment of new rigs up by 5%.

Companies exploring for gas in Poland, such as BNK Petroleum that is exploring for shale gas in the Bytów concession area, have shown that drilling rigs can be sourced from Poland's nearest neighbour (the Czech Republic). United Oilfield Services Company ordered new equipment in the U.S.A. and operates in Poland from its own storage/logistic base.

It should be kept in mind that operations in Poland do not exclude the possibility of providing drilling services in other European countries (e.g. in the UK). Should need arise, ExaloDrilling – the largest service company operating in Poland that owns and operates 26 rigs, including those suitable for drilling more than 1500 m deep wells – may shift some of its rigs to Poland (in addition to Poland, ExaloDrilling operates in African countries, including Libya and Ethiopia, in Asia – including Kazakhstan, Pakistan – and in Europe).

Undeniably, enhanced rig productivity expressed as the volume of gas produced per rig, is the key factor that helps to minimize the number of drilling rigs needed.

Increasing gas production per rig is associated with reduced drilling time and a higher estimated ultimate recovery (EUR). Several or 10+ wells are drilled from a single pad to bring drilling time down. Moreover, technology improvements and a better knowledge of geology will contribute to drilling time reduction.

A higher productivity per well, reported from all U.S. plays, will reduce the demand for drilling rigs, as the planned production targets will be achieved using less wells. The case of the Utica Region and the most recent history are in support of this view.

3. ”For the time being the scale of exploration is too small (…), 180-240 wells should be drilled each year in order to achieve adequate progress of works. This, however may prove to be problematic. Drilling equipment is a major headache. ExaloDrilling owns and operates some 20+ drilling rigs. Not all of them are suitable drilling shale gas exploration wells (…). (...)Approximately 1700 onshore drilling rigs are operated in the U.S.A, whilst in the entire European Union there approx. eighty of them. This means that the rate of exploration is too slow in Europe and Poland”. Cited after http://gazownictwo.wnp.pl/polskie-lupki-zbyt-malo-odwiertow-zbyt-malo-ur...

4. ”Even in the case of success, the price will be similar to that of imported gas due to the conditions such as the cost of labour, population density, the number of drilling rigs that are available in Europe and so on”. Vladimir Feygin – interviewed by RMF FM in January 2014, http://www.rmf24.pl/tylko-w-rmf24/wiadomosci/news-doradca-kremla-dla-rmf...

5. The limited supply of drilling rigs that meet regulatory requirements is one of the factors slowing the exploration for shale gas in Poland „Shale gas in Europe: revolution or evolution?” http://www.ey.com/gl/en/industries/oil---gas/shale-gas-in-europe--revolu... 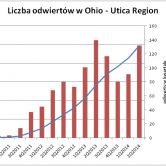 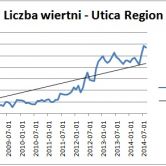 Why oil price is going down?
An analysis and commentary on the current status of the fuel and energy markets