Ministry of the Economy: gas consumption will rise in Poland

Economy Ministry's projections indicate that natural gas consumption will be on the rise in 2015 and subsequent years, informs "Rzeczpospolita" daily.

"Rzeczpospolita" notes that the plans to build new gas-fired heat and power plants is a major factor behind that growth. Gas-fired units are already being developed in Gorzow Wielkopolski, Stalowa Wola, Włocławek and other locations, whilst more of them are planned in Będzin, Płock and Warsaw – the daily reminded. These projects will generate additional demand for gas in the order of 2 Bcm per year, Rzeczpospolita wrote.

Moreover according to Rzeczpospolita, the demand for gas is stimulated by the growing economy and an increasing gas penetration across Poland. Central Statistical Office data indicate that Poland's gas pipelines were 139 797 km long in 2013. In the past ten years the network has grown by 20 346 km. Also the number of gas users has been growing and reached 20.158 million individuals in 2013 (368 thousands more comparing with 2030). 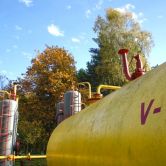 Shale gas – what tax should be applied and when?
The public debate on tax levies to be charged in Poland on shale gas production failed to address some important aspects, among them the rea