Poland needs a mineral resource policy – said Prof. Maciej Kaliski of AGH University in Krakow. The policy is also about establishing a list of strategic deposits in Poland and designation of their functional areas. Once prepared, government plans for the management of the natural resources, gas reservoirs, coal/lignite and metal ore deposits will contribute to the economic development. According to announcements by the Vice-minister of the Environment, the document is to be prepared in the next three years.

– Poland is rich in mineral resources – its deposits of coal, lignite and polymetallic ores are also of importance to the European Union – emphasized Prof. Maciej Kalisji of Krakow AGH University of Science and Technology in an interview granted to Newseria Biznes news agency.

According to the “Poland's Mineral Resource Policy” Report, as published by the Foundation for the Economy and Public Administration in 2015, in addition to coal and gas resources Poland holds sizable deposits of zinc, lead and rare earth metals, such as rhenium. Poland is the world's sixth largest producer of cooper and second largest producer of silver. Almost 12,500 deposits, including 4,500 commercially developed ones, have been entered to the list of Poland's mineral resources.

As Prof. Kaliski emphasized, the process of mineral resource policy development has a long history. The Conceptual National Spatial Management Plan till 2030 was adopted in December 2011. The document specified three mineral resource policy tasks. First, designation of functional areas for strategic deposits. Second, preparing the list of deposits that are of strategic importance to Poland's economy and approving the plans of their development. Some work has been partly done, but it will take long time to develop the final policy – said Prof. Kaliski.

The present government has declared its will to focus on the policy. As Mr. Mariusz Orion Jędrysek, Environment Vice-minister and Poland's Chief Geologist, recently announced, the document should be developed in the next three years.

According to Prof. Maciej Kaliski this will have a huge importance to Poland's economy, as the market of energy resources accounts for approx. 70–80 percent of the economy.

– Knowing which deposits are subject to protection, what are the functional areas, i.e. those exempted from infrastructural development, we will be able to specify the potential for other activities and development in some regions of the country, while the economy will benefit from long-term prospects for the use of treasures that are hidden in the ground – the expert emphasized.

A mineral resource policy is expected to enhance stability, as perceived by potential foreign investors in Poland.

The development of a mineral resource policy is also expected to help organize legal aspects of the exploitation of Poland's mineral resources, including ownership aspects, and clearly establish whether there is a single owner responsible for the management in that area.

– So far these responsibilities have been distributed between various ministries and currently it is quite unclear who is in charge of management – the scientist from AGH University of Science and Technology in Krakow explained and added: This is a precondition for the regulation of these matters which in a long-term perspective will enable us and the future generations to benefit from these prospects.

However, Polish companies have now access to both Polish and foreign mineral resources, including offshore and onshore oilfields in Norway, Canada, Lithuania, Ukraine and Africa, as well as copper deposits in RSA and phosphates in Senegal.

– The expansion of Polish companies into foreign mineral resources is a really important issue – Prof. Maciej Kaliski noted and added: We should not focus solely on domestic resources. I appreciate the efforts of such companies as KGHM, Polish Oil and Gas Company (PGNiG) or Lotos Petrobaltic that invest in countries other than Poland. This helps to enhance competitiveness of Polish companies worldwide. 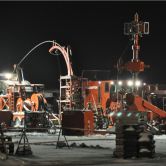 Why oil price is going down?
An analysis and commentary on the current status of the fuel and energy markets

Minister of the Environment: there still potential for shale gas in Poland
In an interview granted to Puls Biznesu, Maciej Grabowski speaks about shale gas prospects in Poland