According to the report, gas emissions from big industrial plants were 0.6% up in 2012 comparing with 2012, mainly due to the use of coal in energy generation.

On the other hand, methane gas emissions from the oil and gas exploration and production sector were lower by 1% comparing with 2012 and as much as 12% comparing with 2011. A high reduction of methane emission (by 7%) over that period was reported from hydraulically fracture stimulated wells.

Nevertheless, the oil and gas sector was the second largest fixed source of emission in the USA, which released 224 million tonnes of greenhouse gases in 2013.

EPA expects the emission reduction trend to be permanent, partly due to the introduction of Agency's standards for the oil and gas industry in 2012. 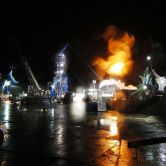