1. wastes that are directly associated with drilling operation and subsequent  reservoir tests, i.e. extractive wastes, attributed under Environment Minister's Ordinance of 27 September 2001 on the catalog of wastes (Journal of Laws No. 112, Item 1206) to Group 01 05. These are:

2. wastes that are produced in association with drilling rig operation, delivery of services, presence of employees on the drill site, etc., attributed under Waste Catalog mainly to groups: 08, 13, 15, 16, 17 and 20. These include in particular:

According to the Catalog of Wastes, group 01 wastes (that are produced at exploration, extraction, physical or chemical processing of ores and other mineables) fall into the following types:

It is estimated that the drilling of a single exploratory well produces on average from 2500 to 6000 tonnes of wastes (mud and cuttings. Both volumes of generated wastes and their properties vary from one well to another and are contingent on the following factors:

The process of reservoir stimulation (for example hydraulic fracturing) also generates specific wastes. It is difficult to estimate their volumes and characteristics as they are controlled by numerous factors, including:

Due to the great number of variables, the volumes of wastes produced by stimulation jobs is highly variable and ranges from several hundred to as much as several thousand tonnes. Experience from the USA and Poland shows that 15 to 80% of injected fluids is recovered – mostly in the days that immediately follow the job.

Shale gas exploration projects are currently relatively small waste producers and account for less than 0.1% of all industrial wastes generated in Poland. Also the number of waste producers is small (19 entities in 2012).

Total production of shale gas exploration wastes in the years 2010-2012 was as follows:

It is difficult to estimate potential volumes of wastes that shale gas exploration and appraisal project may generate in the future. First of all, the number of wells to be drilled in particular years to come is unknown. According to estimated by the Ministry of the Environment, more than 300 wells are to be drilled by 2021. The plan envisaged drilling 70 wells in 2013. However, only 12 of them were made.

Nevertheless, assuming that the plan will materialize by 2021, shale gas exploration will produce approx. 105 000 of extractive wastes per year. 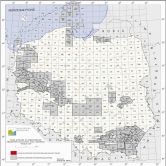