Detailed composition and characteristics of wastes primarily depend on the type of mud used  (water- or oil-based mud, inhibitors added, etc.).

In addition, well drilling, casing, cementation and reservoir stimulation jobs produce relatively small amounts of other other wastes, such as:

At the stage of reservoir stimulation, flowback water recovered from the well is the main waste.

Chemical composition of flowback water may vary and is primarily contingent on:

In addition to substances used for fracturing fluid preparation, flowback water may contain components that have been leached out from the fractured rock, including:

So far, 21 hydraulic fracturing operations have been made in Poland, of which only 8 in horizontal legs. Information on chemical properties of flowback fluids has not been made available with the exception of the Łebień LE-2H well. Polish Geological Institute – NRI made in-depth tests of the fluid in 2011 for the report titled "Studies on environmental aspects of hydraulic fracturing made in Łebień LE-2H well".

Flowback fluid from the Łebień LE-2H well had variable chemical composition (depending on the time of its recovery from the well) and the values of selected parameters in fluid samples tested ranged in very wide intervals:

In overall, flowback fluid portions that were first recovered from the well displayed lower concentrations of particular components. The longer the fluid remained in the well, the higher was the content of chemical components, even several dozen times higher than the initial concentration.

Flowback fluid may be recovered over a period of several weeks and the flow rates tend to decrease with time. A majority of the returning flowback fluid (up to 95%) is recovered in the first days following the job. 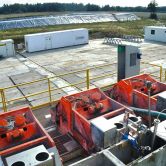 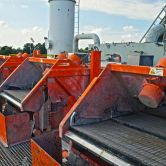 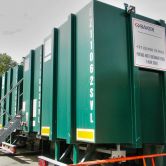 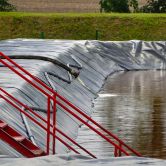 Noise
Is shale gas exploration a potential source of noise?