Following the US gas production success story, geologists have identified within European basins a number of dark shale formations with a potential for shale gas accumulations.

The oldest European shales which have potention for unconventional oil and gas exploration are the so-called alum shale rocks (Upper Cambrian – Lower Ordovician). They are found in Sweden, Denmark, Norway and, to a limited extent, in Poland and Estonia.

In South Sweden, alum shales occur at a relatively low depths (down to 1500 m) and their thickness is in the order of 100 m. Due to a very high content of organic matter (up to 20% TOC) and thermal maturities indicating a late gas window, they were until recently considered as excellent exploration prospects. Unfortunately, a too low shale saturation with gas was found in three wells drilled out in the region of Scania.

Despite the unsuccessful exploration in Sweden it is still planned to investigate prospectiveness of the alum shales in Denmark's North Jutland and North Zealand where these rocks occur much deeper.

Like in Poland, Lower Paleozoic shales of the Silurian Basin at the western slope of the East European Craton are exploration targets in South Lithuania, West Ukraine, Romania, North Bulgaria and South Moldova.

In Lithuania, Silurian shales, which are thought to be in oil window, occur at depths to 1000 m. They are believed to be source rocks for small oil deposits discovered in Central Lithuania.

In Ukraine, Silurian shales occur at depths ranging from 1000 to 5000 m in the Lviv Depression, an extension of the structures found in the Lublin Region. Moreover, potential unconventional hydrocarbon accumulations are being explored in the Dnieper-Donetsk Carboniferous Basin (East Ukraine) and in the Maykop Oligocene Shale Formation in the south.

In Romania, exploration efforts focus on the Moesian and Moldavian Platforms where Silurian Tandarei and Jurassic Bals shale formations are considered as potential targets.

Lower Paleozoic (Ordovician/Silurian) shales of the Prague Basin (the Czech Republic) are believed to hold gas potential. They are thick and contain a lot of dispersed organic matter, but the lack of adequate thermal maturity, as required for triggering the gas generation processes, is a potential limitation.

In Northwest Germany, potential unconventional hydrocarbon accumulations are located in Carboniferous, Jurassic and Cretaceous formations of the Lower Saxony Basin which also stretches across Belgium and the Netherlands. Lower Jurassic Posidonia shale which occur at a depth of approx. 3000 m and are 15 to 30 m thick, seem to be the best exploration prospects. Posidonia shales contains on average 8% TOC which over an extensive area is in the “oil window”. Moreover, prospective Posidonia shales are found in the Bodensee Trough (Southwest Germany). Equally important though less prospective are Wealden (Lower Cretaceous) shales. They are rich in organic matter and up to 700 m thick in the central portion of the basin.

A complex geology of the West Netherlands Basin includes Geverik and Epen (Carboniferous), as well as Posidonia (Lower Jurassic) shale formations which are considered as potential prospects for the production of unconventional hydrocarbons.

The depth of the Geverik shale formation ranges from 1500 to 5000 m and its thermal maturity indicates that they are entirely in the “gas window” (1.0-1.3% Ro), while the younger Epen shale formation is found at depths ranging from 1000 to 5000 m and its thermal maturity ranges from 0.7 to 1.0% Ro. On average, organic matter content in Geverik and Epen shales is not in excess of 4% TOC. Posidonia shale that cover the Carboniferous rocks in the West Netherlands Basin contain on average 6% TOC and occur at depths ranging from approx. 1000 to 3600 m. Over an extensive area the shales are in the oil window (0.7-1.0% Ro), but locally they reach the gas window (1.0-1.3% Ro).

There are two shale gas and oil exploration regions in the United Kingdom: the northern region with Carboniferous shale of the Pennine Basin as exploration target, and the southern regions with Lower Jurassic shales of the Wessex and Weald Basins.

In the Pennine Basin, the shales are thickest in structural depressions, while intervals rich in gas generating organic matter are sometimes several hundred meter thick. Average organic matter content is approx. 2-5% TOC and its thermal maturity is equal to approx. 1,2% Ro.

Wessex and Weald shales occur at depths ranging from 1000 to 2100 m. They are rich in oil-prone organic matter with thermal maturity of approx. 0.8% Ro and considered as a source of the local conventional oil deposits. A complicated geology of shale basins in the UK adds to the difficulty and risk of exploration.

The Paris Basin and the Southeast Basin in France are likely to contain significant shale oil and gas resources. Permian/Carboniferous shale, sands and coals are the potential gas- and oil-bearing rocks in the Paris Basin, along with Lower Jurassic shales. Paris Basin's rocks are most probably in the oil window and it is reasonable to assume that they are saturated with shale oil. In the Southeast Basin, Lower Jurassic shales that occur at depths ranging from 1000 to 4900 m are the richest in organic matter (TOC content approx. 2% on average). Since their thermal maturity is high and ranges from 1.3 to over 1.7% Ro, they are expected to contain the shale gas.

In Austria, unconventional gas resources are likely to occur in the Vienna Basin. The Upper Jurassic rocks of the Mikulov Formation, from which numerous oil and gas shows have been reported, are the most prospective formation. They have a high content of organic matter (from 0.2 to 10% TOC) and thermal maturity is in the gas window (1.6% Ro on average). Unfortunately, the Mikulov Formation occurs at depths ranging from 7000 to 8000 m, which makes it a tough exploration target.

In Hungary, exploration for unconventional resources focuses on the Pannonian Basin or more precisely on the Makó Trough along with Békés and Derecske Basins. Endrőd Formation, hitherto believed to be the source rock for oil and gas supply to conventional deposits, is considered to be the most prospective one. Nevertheless, tight gas reservoirs, such as the Miocene sandstone/claystone Szolnok Formation, are now considered as even more prospective exploration targets.

In the Iberian Peninsula, shale gas exploration is still at an initial stage. The region of Cantabria in the north of Spain is a potential exploration target where gas is expected to occur in interbedding shale, marl and Jurassic limestone beds.

In Portugal, unconventional hydrocarbons may occur in the Lower Jurassic shales of the Lusitanian Basin which are counted among the most important source rocks of that basin. 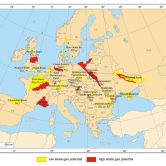