There are several tens of prospective shale formations located in various US sedimentary basins, of which six account for 88% of daily shale gas production. In decreasing productivity order, they are:

The remaining formations account for 12% of the total shale gas production.

Fort Worth in Texas with its Barnett Formation is the best understood basin and the first one to produce shale gas. The Barnett Formation is represented by Lower Carboniferous shales rocks that occur at relatively small depths of 1980 to 2600 m. Their average thickness is in the order of 90 m, but increases to 200 m in the northeastern section of the basin. Organic matter content ranges from 3 to 12% TOC at an average thermal maturity of 1.6% Ro (vitrinite reflectance scale). The geological characteristics of the Barnett Formation are considered as model ones and are often used as benchmarks for other shale formations worldwide.

Recently, Upper Jurassic shales of the East Texas Basin's Haynesville Formation saw a rapid development of gas production which has increased dramatically over the past six years. Located at depths ranging from 3200 to 4100 m, this is one of the deepest US shale gas formations in the USA, but at the same time the most productive in the United States. Its average thickness is approximately 80 m, while organic matter content and thermal maturity are similar to those of Barnett Formation.

Middle Devonian Marcellus Formation of the Appalachian Basin is the third biggest shale play in the USA. At the same time, it is one of the shallowest formations as its depth ranges from 1200 to approximately 2400 m in the eastern part of the basin. Marcellus beds are on average about 45 m thick. The formation is rich in organic matter: average TOC content is 4% and ranges from 2 to 13%, at thermal maturity in the order of 1.5 Ro.

Marcellus Formation in the Appalachian Basin is underlain by Utica, another prospective shale formation. The latter is considered as the most similar to the Polish Ordovician/Silurian shale formation. Utica is today the only US shale gas producing formation which, like its Polish counterparts, is of Lower Paleozoic age.

However, some Utica parameters diverge from those of Polish formations. Prospective dry gas-bearing complexes (on average about 150 m thick) occur at depths ranging from 2500 to 3800 m. Like Polish shale formation, Utica shale has a low content of organic matter: its average content is 1.3% TOC and thermal maturity does not exceed 1.6% Ro.

The Upper Cretaceous Eagle Ford Formation in South Texas is one of the youngest shale formations. The thickness of shale packages which occur at depths ranging from 1200 to 3050 m is between 30 and approx. 90 m, with maximum thicknesses reached in deeper central portions of the basin. Comparing to other “big six” plays, Eagle Ford has the lowest content of organic matter (in the order of 2.7% TOC). Thermal maturity is approx. 1.2% Ro. Like in the case of Poland's Lower Paleozoic shale formations, there is a transition with increasing depth from the oil generation window to wet gas and finally to dry gas window.

Devonian Woodford Formation in the Arkoma Basin (Southeast Oklahoma) is the sixth most productive shale gas play in the USA. Formation's depths range from 1820 to 3960 m and its average thickness is approx. 45 m. Its organic matter content is the highest among all US plays (about 5% TOC on average) and thermal maturity is in the order of  1.5% Ro.

Extensive exploration works with rapidly increasing production are underway in shale formations other than the “big six” plays, for example in Bakken (shale oil), Antrim, Lewis and Utica. Low gas prices in the United States are an incentive to the drilling operations and help make the country independent of gas imports. This is just the contrary of Poland's current situation. 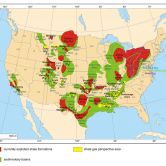 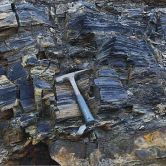