Mechanical properties of shales, which include mainly compressive elasticity coefficient, as well as compressive and extensional strengths, are primarily dependent on the mineral composition of the rock.

The key constituent elements of the geomechanical model of shale complexes are:

Mechanical properties of the shale rock fabric, which include mainly:

primarily dependent on the mineral composition which follows the distribution of facies within the sedimentary basin.

The content of clay substance is a key decisive factor behind shale properties. A large share of clay weakens the rock fabric by enhancing plastic deformation, which leads to a lower brittleness of the shale rock. Clay substance accounting for more than 40% is considered as a process problem in fracturing procedures, while a high content of silica and diagenetic carbonates enhances brittleness and helps fracturing.

Shale rocks are inherently mechanically anisotropic. Anisotropy is stronger vertically, mainly due to the lithological separation and orientation of clay mineral flakes (lamination). Measured in situ, horizontal anisotropy is weaker, but it is more important for the selection of an optimal trajectory of a horizontal well. The anisotropy is controlled by regular fractures of the shale complex and differential horizontal stress.

Longitudinal and transverse wave propagation patterns define dynamic parameters of the rock that depend on the direction of their recording. Accordingly, mechanical parameters of the shale rocks are dependent on the scale of observation, rate of strain, propagating wave length and the direction of wave recording.
Therefore, selecting a scale of measurement that is suitable for the task to solve (for example, hydrofracturing planning or permeability assessment) and the determination of anisotropy directions and level are the key problems that are encountered when defining mechanical characteristics of shale rocks.

Moreover, geomechanical properties of shale rocks are highly dependent on the pressure of reservoir fluids which, by counteracting the lithostratigraphic and tectonic loads, govern the effective stress that is applied to the rock fabric. Pore pressure often occurs in shale rocks due to mechanical compaction that reduces pore space, as well as by directional layout of mineral flakes that reduces vertical permeability and hinders pressure release from the upward flow of fluids.

Another reason behind pressure increase in shale rocks is the release of fluids and gases from rock-forming minerals under increasing temperature and pressure, for example during hydrocarbon generation or mineral phase changes. Rock pressure may increase to the point of rock fabric's minimum stress, increased by its cracking strength, which is not noticeable due to the initial micro-damages of the rock.

As the pressure grows above the lowest stress in the rock fabric, the rock bursts naturally and the cracks are filled with minerals precipitated from the brine water (mostly carbonates and silica).

A higher pressure enhances rock brittleness and helps to push hydrocarbons towards the production well. Any significant overpressures do not occur in Polish shale rocks at the prospective depths (down to 3.5 km), which is unfavourable in terms of reservoir engineering.

Shale tectonics is another significant constituent of the geomechanical model. Horizontally bedded formations, ideally suited for horizontal drilling and free of any major fault zones that are likely to compromise the effects of fracturing by acting as sinks of  fracturing fluid, are the best candidates for the development of unconventional accumulations.

An optimal drilling location is established on the basis of seismic survey results, preferably of a 3D test which, in addition to an image of the shale formation structure, provides an insight into its elasticity and mechanical anisotropy properties.

Lower-order tectonic structures, revealed by downhole logs or drilling core examination, are present in a shale rock complex in which seismic tests have not identified any noticeable deformations.

Investigation of these structures and of serially occurring minor faults is of a key importance to the optimization of fracturing tests and hydrocarbon flow to the wellbore through hydraulically induced or tectonic fractures.

Contemporary tectonic stresses represent boundary conditions of the geomechanical model of shale complexes. Thanks to the knowledge of contemporary stresses, the horizontal section of an exploratory or production well can be directed so as to ensure that the fractures induced by fracturing jobs, which normally propagate towards the largest horizontal stress, are perpendicular to the well bore.

In the case of normally horizontally laying shale complexes, one of the principal stress axes is oriented perpendicularly with regard to the ground surface. Horizontal stresses can be assessed on the basis of borehole breakout or hydraulic fracture data induced by highly pressurized heavy mud. Comparing these data with rock strength allows for an assessment of the stress regime (spatial relationships between ground surface and stress axes), and  sometimes of the stress magnitude.

Borehole wall mini-fracturing tests, which are made before the large-scale commercial fracturing jobs, are commonly used to determine the least stress value.
The distribution of contemporary tectonic stresses in Poland has been established by scientific research studies made by Polish Geological Institute-NRI over the past several years. The synthesis of information on shale geomechanics is presented in the form of one- or three-dimensional mathematical models considering all of the aforementioned mechanical, hydrodynamic, structural and stress components.

The model makes it possible to forecast hydraulic fracturing effects and, more importantly, to design optimum fracturing sequences in several horizontal wells and to interpret results of fracturing procedures. 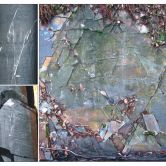 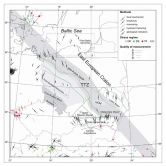