Natural gas occurs mainly in the Polish Lowlands. Gas reservoirs are also reported from the Carpathian Foothills. Limited gas resources were found in small reservoirs located in the Carpathian Mountains and in the Polish economic zone in the Baltic. About ¾ of the gas resources are located in Miocene and Rotliegend formations and the balance in Cambrian, Devonian, Carboniferous, Zechstein, Jurassic and Cretaceous sediments.

In the Polish Lowlands, natural gas reservoirs are located in Permian formations of the Foresudetic and Wielkopolska regions, whilst in West Pomerania they are found in Carboniferous and Permian sediments. These water and gas drive reservoirs occur in massif and block structures. Only a few of these reservoirs contain high-methane gas, but a majority of them contains predominantly high-nitrogen gas with methane content  ranging from 30 t more than 80 %. Therefore, it is frequently a methane-nitrogen or nitrogen-methane mixture.

In the Carpathians, natural gas occurs in Cretaceous and Tertiary sediments, both  unassociated or associated with crude oil or condensate in gas drive reservoirs. This is a high-methane (methane contents in excess of 85%) low-nitrogen (on average, nitrogen content is in the order of a few percent) gas.

In the Polish economic zone on the Baltic oil-associated gas occurs in B 4 and B 6 reservoirs.

Currently, Polish Lowlands account for 69% and Carpathian Foothills for 26% of the total recoverable natural gas resources. The resources of the Baltic zone and of the Carpathians are of secondary importance (they account for 4.0% and 1.0% of national resources, respectively).

In 2014, 5.258 Bcm of natural gas were produced from reservoirs with proven reserves, or 0.230 Bcm less comparing to 2013. Recoverable gas reserves and production data from 1989 through 2014 are presented in the following figure. 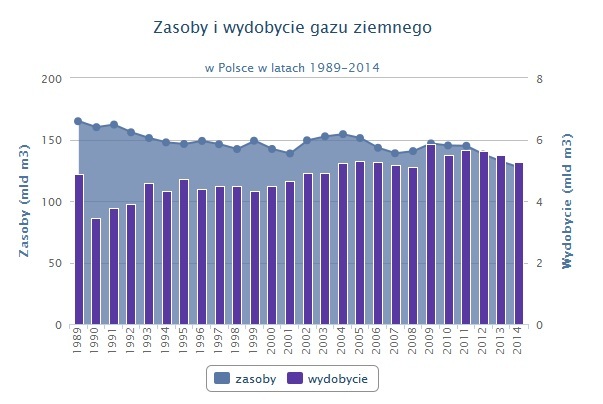 Based on archival data from 1950-1990, the Polish Geological Institute – National Research Institute prepared, in collaboration with U.S. Geological Survey (USGS), an estimate of shale oil and gas resources in lower Paleozoic rocks of the Baltic – Podlasie – Lublin Basin. Total onshore and offshore recoverable resources of the Basin are not expected to exceed 1920 Bcm of natural gas and 535 million tonnes (MT) of crude oil. Considering the estimation parameters, the resources are most probably in the range of  346 – 768 Bcm of gas and 215 – 268 MT of oil (2).

The first preliminary report on the estimated tight gas resources of Poland's most prospective sandstone reservoir complexes (3) was prepared in 2014 as part of the tasks of Polish Geological Survey. Three geological complexes were considered: the Permian Rotliegend sandstones of the Poznań-Kalisz zone, Carboniferous sandstones of the Wielkopolska-Silesia zone, and Cambrian sandstones in the West Baltic Basin.

Based on archival data and the latest data provided by exploration companies operating in Poland, the most probable potential tight gas resources in the aforementioned regions are in the order of 1528-1995 Bcm. According to the authors of the report, technically recoverable resources can be estimated assuming a recovery ratio of 5-15 % (10% on average) for each of the regions. 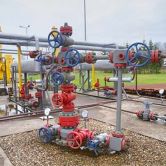