Investigation of organic matter contained in the rock is a key stage of shale rock studies. Organic matter and organic carbon are the key terms that are used to describe the shale rock characteristics.

Organic matter is primarily defined as organic compounds that are directly or indirectly derived from cells or tissues of living organisms. In the case of shale rocks, these are mostly phytoplankton organisms, while in the case of other energy resources, such as coal, organic matter is composed predominantly of terrigenous material derived from trees, shrubs, ferns or leaves. Mineral skeleton parts, like bone fragments or shells, are not attributed to organic matter.
The content of organic matter is expressed as percentage share of the Total Organic Carbon (TOC) in the rock.

It is generally assumed that in order for a shale rock to be the target of basic tests made by petroleum geologists, its TOC content should be higher than 1 wt% and preferably in the order of wt2% or higher, like Devonian/Carboniferous New Albany Shale rocks of South Indiana (USA) or Lower Jurassic Yorkshire shales (UK). TOC content in Polish Ordovician/Silurian shale rocks are only occasionally in excess of 2%.

Organic matter present in the shale rocks has been locally (autochtonously) produced as a result of massive algae blooms that occur in surface waters of the seas and oceans in which the autotrophs (such as bacteria and algae) rely on the process of photosynthesis. During that process, autotrophic organisms transform the dissolved inorganic carbon and nutrients into organic matter.

Any phytoplankton bloom is contingent on the supply of nutrients, of which distribution across the oceanic environment is very uneven and dependent mostly on the course of sea currents and the presence of river mouths that are the main sources of organic run-off from land. Accordingly, shale rocks having the highest organic matter content are formed in shallow shelf seas in the proximity of extensive river delta systems.

The activity of such organisms is controlled by the availability of oxygen in the sea bottom environment. As soon as the bottom is getting depleted in oxygen, benthic organisms move to a better oxygenated environment. A further decrease in oxygen content at the bottom is increasing the chance for preservation of organic matter accumulated in bottom sediments in the absence of benthic fauna and aerobic decomposing organisms. A small portion of organic matter that has survived destruction has a chance for preservation in deeper parts of the sediment column and may enter the geological carbon cycle. It may, under specific conditions, contribute to the generation of hydrocarbons and formation of oil or gas deposits.

The evaluation of organic matter content is a key stage of shale rock studies. Fairly sophisticated investigation tools are used to determine the TOC content.

Rock Eval pyrolysis is the most frequently used method which provides information about the content, origin and maturity of organic matter in the rock. In short, the method  involves thermal decomposition of a fragmented rock sample (~100 milligrams) in a furnace in the atmosphere of nitrogen gas. The sample is progressively heated to 850°C using a programmable temperature controller.

During the pyrolysis, the volume of the so-called volatile hydrocarbons, released at temperatures below 350°C, is expressed as S1 parameter. A further thermal decomposition of the sample at temperatures up to 650°C involves pyrolysis of more durable organic matter fractions and again releases hydrocarbons along with carbon dioxide and oxide from the decomposition of organic and mineral matter, as well as of non-pyrolisable organic matter. The results are expressed as parameters S2, S3 and S4, respectively. Carbon dioxide is released from carbonates at 850°C (S5 parameter).

The results are recalculated and expressed as the contents of pyrolisable, non-pyrolisable and total organic carbon (TOC), as well as mineral carbon content.

In addition to TOC, pyrolytic analysis allows for the determination of other parameters that help to assess the type of organic matter, its thermal maturity and origin, alongside the properties that are used in oil and gas exploration. The so-called maximum temperature, which indicates the stage of maturation of the organic matter, is an important parameter, along with hydrogen and oxygen indexes that characterize the type and origin of organic matter contained in the rock.

Potentially the most prospective oil and gas shale formations are located in Poland within three sedimentary basins: Baltic, Podlasie and Lublin Basin. All of them represent Ordovician/Silurian stratigraphic intervals. TOC contents are highly variable in the Baltic Basin and range from 0.5 to 11.0 wt%, which indicates co-occurrence of organic-rich and –poor shale rocks. The highest TOC contents have been reported from Ordovician and Silurian formations focused in the Bay of Gdansk. In the Podlasie Basin organic matter content range from low (0.6%) to very high values (20.0%), whilst in the southeasternmost part of Poland i.e. in the Lublin Basin the TOC values oscillate between 0.5 and 4.5 wt%. 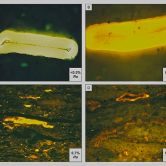 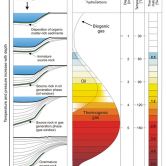 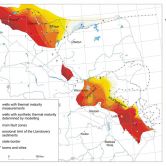 Mineralogy of shale rocks
Mineralogy and petrography of Ordovician and Silurian shales. Level:medium