Shales form a particular petroleum system wherein the same rock formation is simultaneously source, reservoir rock, sealing rock and the trap, while gas migration occurs solely in a micro-scale or is absent. Quite a challenge for the petrophysicists who have to use more advanced techniques of research, especially in micro- and nano-scale.

Shale properties can be described in  different scales of observation:

In order to characterize the petrophysical properties of the rocks, i.e. rock capability to accumulate and transport reservoir fluids, it is necessary to determine the values of two key parameters:

Moreover, the characterization of the reservoir fluid (oil, gas, water) present in the rock is an important aspect. An illustrative petrophysical model of an organic matter-rich shale rock is presented below.

Porosity means the volume of void space in the rock (expressed as percentage) which can be filled with oil, gas or water. Therefore, porosity determines the volume of reservoir fluids accumulated by the rock.

Two types of porosity are distinguished:

Shale rock is built of micro- and nano-sized space pores with varying degrees of water saturation and partly of residual organic matter. Void spaces also occur between rock grains (inorganic pores and micro-pores), but their volume is minimal. Effective porosity appears as a result of fracturing.

So far, in the case of conventional oil and gas reservoirs (sandstones, carbonate rocks) porosity was defined as the void space between rock grains (inorganic pores and micro-pores). In that space and within laminae enriched in silica, as well as in the system of natural fractures and micro-fractures, the gas is accumulated in the form of free gas.

Permeability and fracturability of shales

In the case of shale rocks, both permeability and porosity are highly dependent on:

Accordingly, stimulation jobs (such as fracturing operations) must be performed in order to connect the pores to the borehole and allow for an unrestrained flow of gas and reservoir fluids. 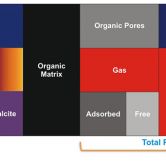 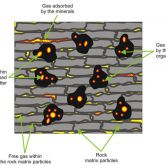 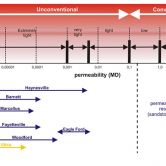