How geologists reconstruct the environment of shale formation?

Core logging and sampling are a primary geologists' responsibility during shale gas exploration. Normally, this is the only opportunity to “touch” the rocks, insofar as in the real environment they are buried in the ground, sometimes as deep as 3 to 4 km. Paleozoic shale outcrops are seldom seen in Poland, they occur only in the Świętokrzyskie (Holy Cross) Mountains and the Sudetes.

The first thing to be done following the retrieval of core samples is to perform a thorough sedimentological analysis so as to interpret the environment in which the fine grained sediments, preserved to this day as shale rock, were deposited.

Sedimentologists describe in detail, in a centimeter scale precision, the lithology of core samples, sedimentary structures, their texture (grain size and grading) traces of animal activity and even the colour.

Based on this information they distinguish  lithofacies, i.e. rocks that display a specific set of features which indicate that they have been deposited in a single depositional process. This makes it possible to determine, even at an early stage of investigation, the rocks with a high content of silica, clay minerals and of organic matter, that were formed in a tranquil depositional environment with a limited access to oxygen, and those having more silica but less organic matter.

Any distinguished lithofacies can be combined into distinct sets of lithofacies, and the latter into depositional systems, which in turn reflect time and space interrelations of accumulation processes. The entire environment of sediment deposition within the sedimentary basin is reconstructed in order to get an insight into the depth of deposition, sedimentation processes involved and subsequent transformations of the sediment.

Tabulated data from several drilling wells and other investigations (geophysical well logging, seismic surveys) enable the interpretation of both horizontal and vertical variability of rock lithology and characteristics. These interpretations are also made for the entire basin, for example in the form of lithofacies-paleothickness maps (Fig. 4f i 4g) which depict the distribution of particular facies and changes that have occurred in the entire basin throughout its history.

What is the origin of shale rocks and what is the influence of their origin on gas formation?

Dark shale rocks are normally referred to as marine sediments deposited on the shelf, on the continental slope or in abyssal plains. They are commonly deposited as a result of particulate falling out from the water column or the action of currents (particle rolling along the bottom). Considering shale gas and oil exploration aspects, it is important for the organic matter to be preserved in the sediment. This may happen only if oxygen deficient or anoxic conditions prevail at the bottom. In fact, non-oxidated sulfides and organic matter are behind the dark or sometimes even black colour of the rocks.

It is also important to know the distribution of facies at a local scale, especially in the context of locating the so called ”sweet spots”, i.e. places that are the best petroleum prospects. Some intervals rich in organic matter are very thick and extensive but often they display a high vertical variability, especially in terms of total organic carbon (TOC) content, a key parameter for petroleum exploration.

This vertical variability is associated with the diversity of the processes and conditions that are involved in shale rock formation. At the rock formation stage, organic matter content is controled on three processes: production, destruction and dispersion.

The intensity of particular processes vary depending on the place of deposition. For example, organic matter production is relatively high near the shore, but at the same time the rate of dispersion is equally high due to supply of material from land and so is the rate of destruction by animals living in the well oxygenated bottom of the basin. Deeper in the sea, organic matter is produced at a much slower rate, but the processes that disturb production are less intense. As a consequence, today there might be more preserved organic matter in deep sea areas comparing to shallower ones. (Fig. 4j). Locating the zone of optimal co-occurrence of organic matter production, destruction and dispersion processes is tantamount to finding rocks that today have the highest TOC content and, therefore, are the best prospects in terms of exploration for oil and gas, including unconventional hydrocarbons. 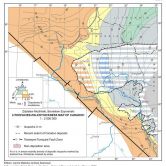 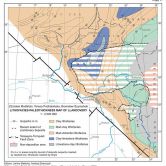 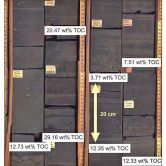 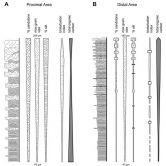 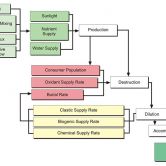