The term of gas (or other mineable) resources carries several meanings that are frequently confused with each other or misunderstood. The meaning is different to a (petroleum) geologist comparing with a journalist or politician. The following drawing explains the reasons behind misunderstanding. From geologist's point of view, it is extremely important to make a distinction between different tiers of the pyramid that reflect successive progressively expensive exploration and appraisal stages, while a journalist or a politician does not care about the subtleties and just wants to know field production figures (the top tier).

Estimation of prospective resources, usually based on scarce data, is the first step of geological studies. The analyses of Poland's shale gas resources have hardly progressed beyond that stage. They are based on the conclusion that Poland's rock formations are similar to those formations in the USA which contain (shale) gas accumulations.

Detailed laboratory tests of gas-bearing rock samples enabled geologists to estimate the quantity of gas per unit of volume in the rock located around the cored well. This, combined with preliminary assessment of both area and thickness of shale formations, made it possible to estimate gas in place (GIP), i.e. the volume of gas contained in the geological formations. As drilling data are scarce and drilling cores available from a few wells, the assessment of Poland's shale gas resources is still at a hypothesis stage (the resources are “potential” rather than “proven”).

Subsequently, once the parameters of prospective shale formations such as:

are known to a sufficient degree of accuracy, we may provide an initial approximation of technically recoverable resources. In practice, parameters that are comparable to those reported from productive North American shale basins are adopted. Considering differences in geology, this allows a significant margin of error. In fact, technically recoverable resources and related shale basin surface areas are indicated by both US and Polish reports on Poland's shale gas resources.

Commercial reserves that can be recovered in a technically and economically viable way, in compliance with the laws and regulations including environmental requirements, are the top tiers of the pyramid.

As of today, there is no reliable information on Poland's potential commercial shale gas reserves. Production tests delivered in hundred or more planned wells will be required to establish the areas in Poland's shale basins that are suitable for economically viable gas production. In addition, data coming from new wells will help to firm up the estimates of recoverable resources and GIP. 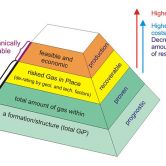