When the Polish shale rocks were formed?

When and where the Polish shale rocks were formed?

This is particularly true for the Lower and Upper Ordovician and the lower Silurian - Llandovery and Wenlock (from approx. 485 – to approx. 427 million years BP). Other potential prospects are upper Cambrian alum shales occurring in the northern Gdansk Pomerania.

Lower Paleozoic shale rocks were formed in a single marine basin at the western edge of the Baltica paleocontinent (a geological structure called the East European Platform is today a vestige of that paleocontinent).

Sediments rich in organic matter were deposited in the basin which had been formed as a result of Earth crust bending, as the continents of Baltica and Avalonia progressively collided with each other. In later geologic history, lower Paleozoic formations had been erosionally stripped in some regions of Poland as a result of tectonic activity.

How do we know the age of Polish shales?

The presence of fossils, including in particular the graptolites, an extremely fast evolving group of plankton organisms, enables relative dating of the Ordovician and Silurian formations that are considered as the most prospective rocks in terms of unconventional petroleum exploration.

Graptolites are common in Ordovician and Silurian dark claystones and mudstones. Biostratigraphic classification based on these fossils is the key and the best tool of stratigraphic correlation. Graptolites make it possible to determine the relative age of the prospective formations and enable the dating of stratigraphic sequences, their boundaries and of anoxic strata rich in organic matter that are the source of hydrocarbons present in the rock.

By tracking the range of particular species, the points of their first and last appearance datum considered as biostratigraphic benchmarks, scientists are able to correlate the prospective formations at a regional scale.

Graptolites are often accompanies by other fossil fauna species: brachiopods, nautiloids, bivalves, as well as by micro-fossils: ostracods, acritarchs and Chitinozoa, but none of them compares to graptolites in terms of dating and correlation of mudstone/claystone successions.

Composition and variability of fossil communities that are present in the Ordovician and Silurian black shale rocks reflect to a high extent the initial composition of the plant and animal communities that occurred in the primary depositional environment of these sediments. The state of fossil preservation, including that of graptolites, frequency of their occurrence and diversity in the shale rocks may indicate the depositional and early diagenesis environment, including oxygen conditions prevailing at the bottom of the sedimentary basin, and help identify aerobic and anaerobic periods which are of key importance to the accumulation and preservation of organic matter in the sediment.

Therefore, graptolites and other fossils that occur in shale rocks are a useful tool in the investigation of the potential source rocks of hydrocarbons, including the shale gas. 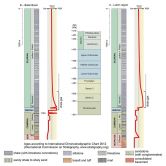 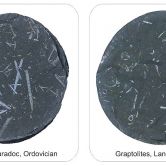 [6] The black gold: shale oil occurrence in Poland
Where the shale oil should be explored for in Poland? Level: basic