Argentina's shale oil output is on the rise

As gazlupkowy.pl reports, shale oil production has been progressively increasing in Argentina. However, the return of the projects may suffer from low oil prices on international markets and high costs of drilling.

The Gazlupkowy.pl news service quoted the words of Miguel Galuccio, Director General of YPF Company operating jointly with US-based Chevron. Currently, 44,000 to 45,000 barrel equivalent of oil is produced from the Loma Campana Play located in the Vaca Muerta Formation. In February 2015, the output was in the order of 41,000 oil barrels per day. This is the highest rate of unconventional oil and gas production worldwide in any country other than the United States – gazlupkowy.pl noted.

Mr. Galuccio has emphasized that falling crude prices have not affected so far YPF's exploration projects, but noted that it would be premature to talk about profitability of unconventional oil and gas production. In South America, the cost of drilling a vertical shale oil well is in the order of USD 11 million and at USD 50 per crude barrel the operations do not break even.

The USA, Argentina, China and Canada are the only shale oil and gas producing countries. 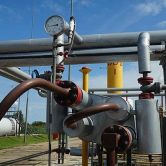