China is the third country worldwide (after USA and Canada) to produce shale gas on a commercial basis. Considering the output, the level of 6.5 Bcm per year may be achieved or even exceeded by the end of 2015. Accordingly, the target of 80 Bcm to be achieved by 2030, as set by Chinese authorities, becomes increasingly realistic.

Representatives of Chinese Ministry of Land and Resources (MLR) briefed on development progress on 5 May 2014 during a visit to Polish Geological Institute – NRI in Warsaw. The delegation was led by Prof. Zhang Dawei, Director of MLR's Mineral Resources Assessment Centre and its member included Prof. Li Yuxi and Dr. Li Jian of the Centre, as well as Mr. Gary Sun, Financial Director at SPT Energy Group Inc. of Beijing.

As Director Zhang Dawei and Prof. Li Yuxi have coordinated exploration and development of shale gas resources since 2004, they should be considered as men behind the Chinese exploration success and shale gas production.

The key stages of shale gas exploration and development in China are:

The Chinese opted for the so-called Texan approach that has proven its effectiveness in the U.S. and led to the shale revolution.

Great importance is attached to continued geological studies of shale gas basins at the final stage of exploration, with major inputs from the Chinese Geological Survey. As a result of recent improvements the output from new wells is in excess of 100 000 or even 300 000 cm per day. This gave rise to speculations on whether Chinese companies succeeded in perfecting or developing shale gas production technology or just discovered exceptionally productive accumulations.

The role of National Energy Administration (NEA) can hardly be overestimated in the Chinese success story. NEA follows a policy of support to shale gas exploration and production projects, which is similar to the policies of U.S. Department of Energy from the beginning of shale revolution. In October 2013 NEA introduced additional incentives to the operators. They include five key items:

The policy is geared towards encouragement of development and innovations in domestic shale gas exploration and production companies. Notably, China's excellent results in boosting shale gas production are primarily due to the efforts of domestic companies, mainly those belonging to Sinopec Group (China Petrochemical Corp.) and China National Petroleum Corp. (CNPC).

During the meeting with the Chinese delegation, PGI-NRI Director acquainted the guests with the history of the Institute with emphasis on the key discoveries of mineral deposits, their importance to national economy, as well as on Institute's statutory mission and tasks mandated by the Ministry of the Environment. He also expanded on the participation of the Institute in shale gas exploration and resource proving efforts.

It was the second visit of representatives from the Chinese Ministry of Land and Resources to PGI-NRI in the past two years. In accordance with the wish of the Chinese party, the visit was intended to begin sharing experience in the management of mineral resources. Consequently, it was delivered as a productive working session.

For more information about the visit of Chinese guests see the website of PGI-NRI. 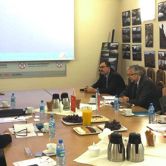 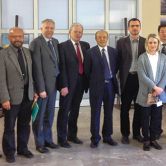