International Energy Agency (IEA) has developed a web application that shows production of three unconventional gas types: shale gas, tight gas and coalbed methane. IEA application is in the form of an interactive map. By selecting one of 21 countries users get access to production data from 1990 to 2012 presented by gas type.

According to IEA, Poland produced 0.664 Bcm of unconventional gas (mainly coalbed methane and tight gas) in 2012.

IEA's application is based on data provided by Rystad Energy AS (2014), U.S. Energy Information Administration (2014) and Cedigaz (2013). Moreover, IEA used estimates by  Canada's National Energy Board (NEB), as presented in the report “Canada’s Energy Future 2013 – Energy Supply and Demand Projections to 2035”. In the case of Poland, the initial non-commercial production of shale gas was included in the application. 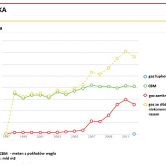 Student's area
For and from students