A team of researchers from the Kyoto University (Japan) is investigating a new shale fracturing method. Supercritical carbon dioxide is to be used to induce fractures and release the gas.

The team of Japanese scientists hope that the new technology will be applied in a few years and a pilot project is to be launched this year. Currently, fracturing fluid based on water with various chemicals and proppant added is used for inducing the fractures.

The new technology is based on CO2 properties. Carbon dioxide becomes supercritical above its critical temperature of 310 C and pressure of 7.375 Mpa. The difference between gaseous and liquid states of that substance disappear in these conditions. Surface tension and viscosity decrease, so that the difference between gas and fluid is disappearing.

If injected to the well, carbon dioxide is decompressed by the action of temperature and induces a dense network of fractures in the rock. Comparing with traditionally used fluids, carbon dioxide-based fracturing is expected to yield better results, insofar as it generates a more subtle pattern of fracture with gas recoverability rising to even 60%. With traditional methods, as little as 15-18% of the total gas contained in the accumulation is recovered.

There are also other benefits from shale fracturing with CO2. Injecting carbon dioxide below the ground may help to control global warming – as that gas is considered as a factor behind these undesired processes. Moreover, additives that raise concerns of shale gas production opponents are not required by that technology.

This month the Japanese launched semi-commercial oil production from Ayukawa field located in the Akita Province (North Japan). Currently, about 220 bbl are produced daily. Shale oil resources in that region are estimated at 100 Bbbl. The demand for oil and gas increased significantly in Japan following the Fukushima nuclear plant disaster.

The concept of fracturing with CO2 is explained in the drawing below. 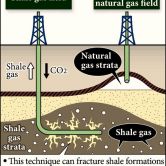 Domestic shale gas production and energy security
Poland's power generation sector relies heavily on coal, but under the Climate and Energy Package Poland is required to increase the sh