Only four countries are now unconventional oil and gas producers

According to wnp.pl portal, four countries commercially produced unconventional oil or gas as of end 2014, as announced by Energy Information Agency (EIA), part of U.S. Department of Energy.

The United States are by far and large the production leader, followed by Canada. Argentina and China launched commercial production of shale gas and tight oil. The latter two countries are considered as excellent prospects in terms of unconventional oil and gas resources. Other countries that have embarked on unconventional oil and gas exploration, including Poland, are not expected to start commercial production in the near future, EIA concluded.

According to EIA, 275 wells for unconventional oil and gas were drilled so far in Argentina and more than 200 of them in China (for comparison – 70 such wells were drilled in Poland but in none of them commercial quantities of gas were found). Both Argentina and China are believed to have high potential for increasing shale gas and tight oil production.

As wnp.pl noted, a number of international major companies are involved in exploration in Argentina where operators' efforts focus on the Vaca Muerta Formation located in the Neuquen Basin, West Central Argentina. The largest Argentina's operator YPF, a state-run company, announced that 22,000 barrels of oil and 1.9 Mcm of gas were produced daily from unconventional plays in April 2015, mainly under joint-venture projects with Chevron, Dow Chemical and Petronas companies.

In China, the accumulations of the Longmaxi Formation (Sichuan Basin, South China) are being developed, primarily by the state-run Sinopec and PetroChina companies that expect to produce approx. 17 Mcm per day by the end of 2015 (i.e. approx. 6.2 Bcm per year), wnp.pl announced.

So far, PetroChina drilled some 125 wells, of which 74 are productive, and expects to produce over 7 Mcm of gas per day (2.55 Bcm per year), while Sinopec produces today approx. 3.7 Mcm per day (1.35 Bcm per year) from the Fuling field. The latter company drilled 75 test wells at Fuling and plans to drill another 253 wells, wnp.pl informs.

According to EIA report, the countries that have already embarked on unconventional oil and gas exploration are: Poland, Algeria, Australia, Columbia, Russia and Mexico. 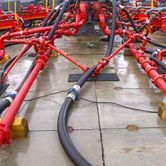