Polish-Chinese talks on the shale gas

Polish-Chinese geological cooperation is likely to materialize. Experts from the two countries are preparing a special memorandum on that subject. Cooperation in shale gas exploration and appraisal is to be a key point of the memorandum.

– We are now preparing the final version of the document which we want to sign in the nearest months to come – said Poland's Chief Geologist Sławomir Brodziński after a meeting held with Chinese experts. It was the second meeting with geologists from the Country of the Middle held over the past twelve months. Mr. Maciej Grabowski, the Minister of the Environment, hosted a five-strong delegation of the Chinese Ministry of Land and Resources (MLR) led by Vice-Minister Dr. Wang Min.

The purpose of the visit was to continue the talks on establishing cooperation between MLR and Polish Ministry of the Environment, according to the arrangements between Poland's Chief Geologist and Undersecretary of State at the MoE Mr. Sławomir Brodziński and Minister Zhong Ziran, made at the China Mining Conference held in Tianjin in October of 2014 (see “Poland's Chief Geologist on a visit to China – China Mining Conference 2014”, Przegląd Geologiczny, vol. 62, no. 12). Moreover, the Chinese experts have acquainted themselves with the practical aspects of shale gas exploration in Poland.

Representatives of the Chinese Ministry of Land and Resources met the Minister of the Environment Maciej Grabowski. The activities of the Polish administration in the area of mineral resource management and exploration licensing, with special emphasis on the shale gas, were the key points on the agenda of the meeting. Moreover, the results of Polish studies on the effects of shale gas exploration and appraisal on the environment, as established recently under the project titled “An assessment of environmental risks from shale gas exploration, appraisal and production”, as coordinated by Directorate General for Environmental Protection, with significant inputs from PGI-NRI, were presented to the Chinese guests. The project, which has been carried out for the Ministry of the Environment since 2012, is to represent a source of information that is required for good management and oversight of all stages of exploration, appraisal and production of unconventional hydrocarbons (shale gas in particular) in Poland.

Polish Geological Institute – NRI was the venue of the next round of talks. Representatives of the PRC Embassy – Dr. Xiangdong Ye, Science and Technology Councelor and Ms. Shao Yinghong, Science and Technology Section – joined the Chinese delegation. Besides Undersecretary of State Mr. Sławomir Brodziński, the Polish side was represented by Ms. Kinga Wojtczak, Deputy Director, Department of Geology and Geological Concessions at the MoE, and – on PGI-NRI's behalf – Prof. Grzegorz Pieńkowski, Director for Cooperation and Promotion, and Dr. Wojciech Brochwicz-Lewiński of Foreign Cooperation Department. Moreover, the representatives of  United Oilfield Services Sp. z o.o. – Dr. Cezary Filipowicz, Vice-president for Development and Mr. Ryszard Wornowicz, spokesman – attended the meetings. UOS is a leading provider of geophysical and drilling services in Poland, especially hydraulic fracture stimulation services for shale gas exploration companies.

The guests from the Far East presented to the Polish partners the Chinese path to the success in shale gas development, which made China the third country worldwide (after the U.S.A. And Canada) to produce shale gas commercially at a fast growing rate, so that ambitious plans set by the Chinese central government for this and the next years are likely to be achieved or even exceeded.

A long-term policy of the central government, including in particular the support from the National Committee for the Development and Reforms and from National Energy Administration (NEA), institutions and companies involved in shale gas exploration, development and production launching, are behind the Chinese success. The latter are mainly domestic companies, in particular subsidiaries of the Sinopec (China Petrochemical Corp.) and China National Petroleum Corp. (CNPC), but also the Chinese Geological Survey. These support measures enabled a huge progress in geophysical operations, as well as the development of drilling, gas flow testing and hydraulic fracture stimulation technologies.

For several years China has successfully explored for shale gas many of its 41 most prospective basins. Minor differences apart, geology is largely similar in the two countries. More importantly, the Chinese have launched commercial shale gas production. Therefore, cooperation with Chinese experts may prove to be exceptionally beneficial for the Polish side. The consultations may shed a new light on the reasons behind the astonishing disparities in estimates of shale gas resources, in particular a hundred-fold (!) difference between the estimates by U.S. EIA and U.S. Geological Survey, as well as on available hardly optimistic results of exploration in Poland.

Photo: Barbara Ruszkiewicz (PGI) & Shao Yinghong (Embassy of the People's Republic of China in the Republic of Poland) 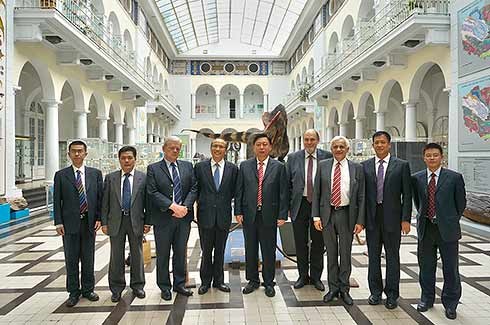 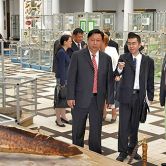