Polish shales in Brussels – the Conference: Unconventional hydrocarbons - the Polish experience in the European dimension

“Please, do it. This is a very good direction” – with these words Professor Jerzy Buzek encouraged Polish geologists in Brussels to continue shale gas investigation and exploration efforts in Poland.

The Unconventional Hydrocarbons - the Polish experience in the European dimension Conference gathered almost a hundred of attendees – specialists in unconventional hydrocarbons, but also members of the European Parliament, the European Commission, and of the EU Steering Committee, as well as representatives of the petroleum industry and environmental organisations. The Conference held on 17 September 2015 was hosted by Polish Geological Institute – National Research Institute.

Professor Jerzy Buzek, former Prime Minister of Poland and former President of the European Parliament, currently EP member and Chairman of the EP Committee on Industry, Research and Energy, was an honorary guest of the Conference. 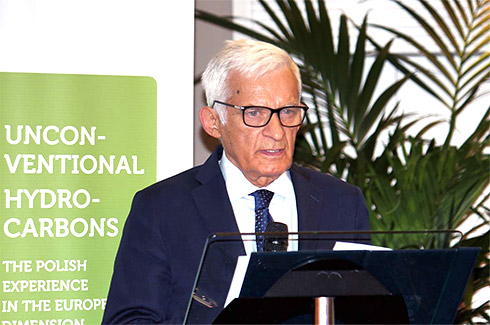 Professor Jerzy Buzek has the floor. Photo by E. Chappell

In his address, Professor Buzek has emphasized the importance of diversification in the supply of energy resources, especially considering the planned Nord Stream 2 gas pipeline.

– How can we react? Decidedly: by taking full advantage of all domestic sources that are available – said former President of the European Parliament. He clearly emphasized the importance of research on shale gas and of the development of new energy production and distribution technologies. While assuring that he is a dedicated supporter of renewable sources of energy, he has noted that they are unlikely to substitute all the energy derived from conventional sources. Therefore – he added – such fuels as gas must be our guarantee for uninterruptible energy supply. That's why continued research on shale hydrocarbons are a necessity. – Please, do it. We are looking forward to seeing the results of your work – said Professor Buzek.

Also Mr. Sławomir Brodziński, Poland's Chief Geologist and Undersecretary of State at the Ministry of the Environment, emphasized the need to use various energy sources in his presentation "Mission possible - unconventional hydrocarbons in the future Polish energy mix", with special emphasis on research on shale hydrocarbons.

– Poland's experience in shale gas exploration and appraisal are unique in the European, and partly also in a global dimension. A comprehensive approach, including reservoir management, collaboration with investors, environmental and social aspects, will certainly attract further studies in Poland and other countries – he said and added: - The debate on shale gas development should be based on results of scientific research rather than on emotions.

Professor Grzegorz Pieńkowski of Polish Geological Institute presented the results of studies, key achievements and lessons learned in his presentation "Shale oil/gas exploration in Poland: disappointment or a good lesson for future?". He reminded the high hopes aroused by the estimates of the US Energy Information Agency, according to which recoverable shale gas resources were to be in excess of 5 Tcm. Polish experts have estimated the resources at no more than 768 Bcm. The latter amount would allow for annual shale gas production in the order of 5 Bcm. – Even that volume is worth of consideration, as it would cover one third of Poland's requirement for gas – said Professor Pieńkowski. With regard to Polish experience in unconventional gas exploration and appraisal he emphasized that Europe it may serve to Europe as a huge demonstration project.

Other presented fully concurred with that statement. Mr. Simon Talbot, Managing Director at Ground-Gas Solutions Ltd, has expressed the opinion that the United Kingdom, where shale gas exploration is underway, is lagging 4 to 5 years behind Poland in that respect, also if environmental studies are concerned. Presentation by Dr. Monika Konieczyńska and Dr. Małgorzata Woźnicka (PGI-NRI) on the results of Europe's first environmental monitoring of shale exploration drilling sites, as delivered in Poland in 2012-2014, fully substantiated that statement. The studies have demonstrated that shale gas exploration and production operations are safe to the environment. Any potential environmental risks are negligible and effectively mitigated, if works are delivered according to the best practice.

Any information of this kind is hardly noticeable to the population and to the politicians  who in public debates are driven by emotions and particular needs, but seldom rely on the results on reliable scientific research studies, as strongly emphasized Professor Hans Joachim Kümpel, German Federal Geological Survey Head.

The issue of environmental risks has reemerged at the panel discussion held in the second part of the meeting with contributions from other presenters: Mr. Rafał Miland, Director of the Department of Geology and Concessions, Ministry of the Environment, and Mr. Koen Verbruggen, President of EuroGeoSurvey and of the Irish Geological Survey 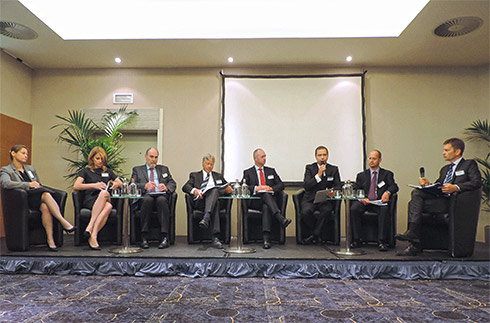 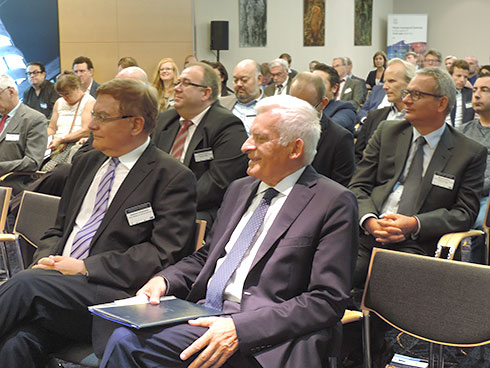 The attendees – in the first row (from left to right): Mr. Sławomir Brodziński (Poland's Chief Geologist, Undersecretary of State at the Ministry of the Environment) and Professor Jerzy Buzek (former Prime Minister of Poland and former President of the European Parliament, currently EP Member and Chairman of the EP Committee on Industry, Research and Energy; in the second row: Mr. Andrzej Przybycin, Director of Polish Geological Survey and Dr. Michał Krobicki (PGI-NRI). Photo by M. Sidorczuk

The organisation and seamless delivery of the Conference was ensured by Dr. Michał Krobicki (PGI-NRI) and Dr. Magdalena Sidorczuk (PGI-NRI). Dr. Sidorczuk is the manager of the project “Support to shale oil and gas informational, analytical and implementation activities for Poland's energy security and environmental protection, including public participation in the licensing process”, of which the meeting was a part. The Conference was held under the auspices of the Ministry of the Environment and of the EuroGeoSurveys and financially supported by the National Fund for Environmental Protection and Water Management. 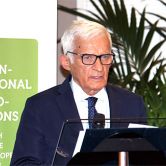 Well abandonment
How the well is abandoned when production or exploration activities are over?