Talking about the shales with EP members

A meeting on shale gas exploration was held in Brussels at Polish Permanent Mission on 15 October 2014. The meeting was attended by Polish EP members who are active in Parliamentary Committees working on this subject, as well as by their advisors and  assistants. The Ministry of the Environment, Polish Geological Institute – NRI, General Directorate for Environmental Protection and Polish Permanent Mission to the EU in Brussels jointly organised the meeting.

During the meeting, the key issues associated with geological and environmental aspects of unconventional gas and oil exploration and appraisal were presented to the attendees from the European Parliament, along with the scope and results of surveys made by Polish Geological Institute. Environment Ministry's representatives discussed the status of shale gas exploration in Poland and changes in Polish laws regulating these matters. The representative of General Inspectorate for Environmental Protection presented the key tenets and available results of environmental monitoring conducted in 7 test gas exploration sites. Moreover, environmental guidelines for concession holders and the list of legal and administrative requirements that oil and gas exploration companies have to comply with at different stages of operations, were presented to those attending the meeting.

Finally, a presentation on the approach of other Member States to shale gas exploration, as well as on both existing and planned shale gas activities of EU institutions closed the meeting. The latter issue is of particular importance considering the ongoing debate on the recommendation of the European Commission of 22 January 2014 regarding minimum principles for the exploration and production of hydrocarbons (such as shale gas) using high-volume hydraulic fracturing (2014/70/UE). Poland as unquestioned EU leader in shale gas exploration, one of few countries in Europe where exploration operations are delivered and the only one where and in-depth studies on environmental impact from exploration are being carried out, is best prepared for an assessment of recommendation made by the European Commission. The meeting was intended, among other things, to share expertise of Polish administration in that area with Polish members of the European Parliament. 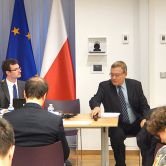 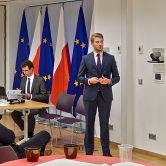 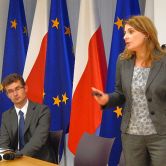 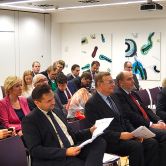