The Conference brought together 60-plus experts, representatives of government administration, research institutions and companies from the UK and Poland. Specialists from Polish Geological Institute – NRI, which is in charge of national geological survey, were among guests and speakers invited to the Conference.

Opening addresses were given by Rt. Hon. Michael Fallon, UK Energy Minister and Ms. Katarzyna Kacperczyk, Polish Deputy Foreign Affairs Minister for Non-European, Public and Economic Policies. In their addresses the two ministers emphasized the necessity to speed up efforts aimed at energy security enhancement and the role to be played by higher indigenous natural gas production, including that of shale gas.

Michael Fallon highlighted that Member States are independent in their decision on shale gas production. While promoting the UK as a country of exploration projects, the Minister said that all changes in legislation (including tax-related ones) have been completed and the next move towards shale gas reserves proving and production is with exploration companies.

The United Kingdom is planning to launch the next licensing round soon. Cuadrilla Resouces (a company operating also in Poland) leads the most advanced exploration project in the UK: its daughter company Cuadrilla Bowland ltd drilled out 4 exploratory wells in the Bowland Basin.

With only 5 shale gas exploration wells, the UK lags behind Poland where 63 exploratory wells have been drilled so far. Nonetheless, scientific research institutions, leading financial market and service companies are available in the UK to join exploration efforts. This combined with optimistic forecasts on shale gas resources helps to believe that the United Kingdom will speed-up efforts aimed at proving the gas reserves. British political leaders are determined to do so.

Since a breakthrough in technology that would enhance gas recovery, rather than resource proving, is now the key challenge, the Conference focused on logistic and technology aspects, including production stimulation techniques. Environmental aspects of exploration and production were the second key topic. Dr. Małgorzata Woźnicka, head of Hydrogeological Risks Programme of Polish Geological Institute – NRI, took part in the environmental panel.

In addition to PGI-NRI, representatives of British Geological Survey, oil and gas companies, service companies, mass media and administration were among those attending the Conference. 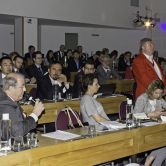