The “Gas from Shale Formations” Seminar was held on March 3-6, 2014 at Polish Geological Institute. The seminar was primarily addressed at central government administration of Lithuania and Lithuanian Geological Survey.

As Mr. Stanisław Cios, head of Global Energy Challenge Department of Polish Ministry for Foreign Affairs, emphasized in his opening address, the idea to hold the seminar emerged in November 2013 at the Warsaw Shale Gas as a Bridge Energy Carrier – from Fossil Fuels to Green Energy Conference with a view in sharing experience in shale gas exploration and licensing, as well as in monitoring potential environmental impacts.

Professor Grzegorz Pieńkowski, PGI-NRI Director for Cooperation and Promotion, welcomed the participants on behalf of the Institute and noted the increasing importance of shale gas production launching for energy security of both countries, in particular considering recent political developments in Europe. He also emphasized the need to dispel concerns about environmental damage that are still being expressed in spite of positive experience from existing exploration projects and 60+ wells that have been recently drilled in Poland.

A presentation session, moderated by Mr. Tomasz Nałęcz, head of PGI-NRI International Cooperation Department, was held on the first day of the Seminar at NGI-NRI headquarters in Warsaw.

In the first two presentations, Mr. Rafał Miland, deputy Director of Geology and Geological Concessions Department, the Ministry of the Environment, expanded on Polish experience in shale gas exploration concession granting, both planned and adopted legislative solutions, and on problems that are still to be solved.
Subsequently, Ms. Małgorzata Woźnicka (of PGI-NRI) presented methodology and results of environmental monitoring in the process of shale gas appraisal and production. Presentation by Mr. Tomasz Gidziński and Mr. Rafał Janica (both of PGI-NRI) was on cross-border groundwater monitoring between Poland and Lithuania. The final presentation by Ms. Magdalena Piątkowska (of ORLEN Upstream) was an overview of best practices in drilling operations.

Day two of the seminar was opened by a session of presentations at the Department of Marine Geology, PGI-NRI in Gdansk. Ms. Małgorzata Maria Klawiter-Piwowarska (Shale Gas Plenipotentiary of Pomeranian Province Local Assembly Speaker) presented shale gas initiatives and projects undertaken by local governments of the Pomeranian Province. Presentation by Mr. Mirosław Lidzbarski (of PGI-NRI) was on environmental studies in the process of unconventional oil and gas exploration on the example of a selected testing ground.

The hosts of the seminar have arranged for a pleasant interlude by screening a Lithuanian version of an animation on life in Ordovician and Silurian seas and on formation of oil/gas accumulations in the sediments. Presentations by Mr. Damian Mucha (the Foundation for Eco-energy Solutions) on the assumptions behind and results of the “Together about the Shales” awareness service and by Mr. Piotr Stankiewicz (Copernicus University in Torun) on public communication management in cooperation with Polish Geological Service, closed the seminar.

The agenda of the Seminar included a field trip. The participants were offered an opportunity to acquaint themselves with Lane Energy Poland's operations at the Sławoszyno LEP-1 drill site. From Sławoszyno they went to the Krokowa Castle where Commune Head Mr. Henryk Doering has acquainted the guests with extensive efforts undertaken by the local authorities to ensure good relationships between investors and the local community, so as to prepare the ground for public acceptance of the planned exploration projects. Field trip to the Oil and Gas Production Site in Żarnowiec (POGC), followed by discussions and impression sharing on return to Gdańsk closed the Seminar.

More than 40 participants attended the Seminar. The Lithuanian side was strongly represented by delegates from the Economic Progress Department of Lithuanian Government Office, Ministry of Foreign Affairs, Ministry of Energy, Ministry of the Environment and from the Lithuanian Geological Survey with its Mr. Jonas Satkunas who has visited Poland for the first time following his appointment as Director of the Survey. The Lithuanian delegation was strengthened by Mr. Saulius Labutis, counselor for Lithuanian Embassy in Warsaw (with an interpreter), representatives of the Association of Geological Enterprises and Ms. Rūta Levickaitė, a journalist.

The Polish side was represented by delegates from the Ministry of Foreign Affairs and Ministry of the Environment, provincial and local government officials, unconventional hydrocarbon exploration companies and a strong group of PGI-NRI employees.

We may venture to note with satisfaction that the seminar has been highly rated by the Lithuanian Foreign Ministry, Lithuania Geological Survey and the representatives of bo Lithuanian and Polish central and local governments. The participants praised the idea to hold a workshop for government administration and geological surveys , the agenda and organisation of the seminar, as well as the atmosphere that was most conducive for  experience sharing and consultations. We have already received requests to hold more meetings of this kind, including meetings of Lithuanian local government officials with local authorities and residents of such communes as Krokowa.

Presentations held at the Polish-Lithuanian Symposium are posted at  www.pgi.gov.pl/prezentacje-litwa.html

Lithuanian version of animated presentation “From Sea to Deposit. How Shale Gas was Formed" is available for download  here. 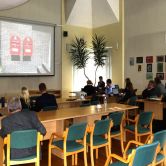 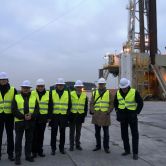 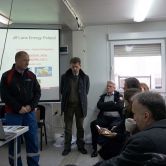 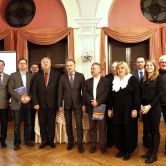 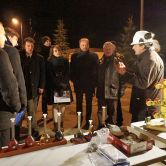