Polish stand at AAPG Convention and Exhibition in Houston (USA)

The Convention and Exhibition of American Association of Petroleum Geologists (AAPG) is the world's largest oil and gas fair that brings together geologists, geophysicists and upstream engineers who represent the industry, government administration and research institutions. More than 9 000 specialists attended the annual event held in Houston from 6 to 9 April 2014. Like such countries as Ireland or Croatia, Poland showcased its presentation at the exhibition. The presentation was prepared by Polish Geological Institute – National Research Institute in collaboration with and support of experts from the Department of Geology and Geological Concessions of the Ministry of the Environment.

The Polish exhibition, prepared by national geological survey performed by Polish Geological Institute – NRI, presented Poland's potential in the domain of both conventional and unconventional oil and gas resources. The posters displayed information about methods used for appraisal and production of shale gas and oil. Moreover, an updated map of exploration and production concessions granted was on display. In addition, the stand offered scientific publications, leaflets and invitation to the scientific conference Recent advances in geology of fine-grained sediments GeoShale 2014, to be hosted by PGI-NRI on 24-26 September 2014 in Warsaw.

During the Convention and at International Pavillion Theatre the Polish delegation delivered presentations on the Polish stand and the status of exploration projects in Poland. Moreover, an overview of Poland's geology was presented, along with the status of ongoing exploration and appraisal projects, as well as with challenges faced by the development of oil and gas resources in Poland. 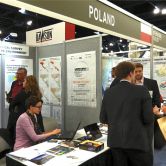 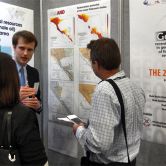