Ukraine: The Italian major Eni is to seek the shale gas

According to wnp.pl portal, the Italian energy major Eni is to launch shale gas exploration in Ukraine near Lviv and in Volhynia. The first well is to be drilled late in 2015.

Mr. Ihor Shevchenko, Ukraine's Minister for Environment and Natural Resources, told that the meetings with the investors started already in 2014. The issues of Eni's pending field operations were discussed at the meetings. As early as 2013, the Italian corporation expressed an interest in Ukrainian shales, but the project has been postponed several times, wnp.pl announces. Today, Eni holds 9 shale gas exploration concessions in West Ukraine, mostly within the so-called Lviv Basin area. The total acreage of these concessions is about 3800 km2 – according to wnp.pl.

Domestically produced gas is an opportunity for Ukraine to become independent in terms of energy supply. As of 2014, Ukraine produced 20.50 Bcm of conventional gas, or approx. 5% less comparing with 2012, wnp.pl informs.

Eni is one of the 10 oil and gas majors worldwide. Its activities include oil and gas exploration, production, transport, processing and sales. Eni operates in 79 countries and its employment is almost 80,000.

In the past, Eni explored for shale gas in Poland, too. It held 3 concessions in Poland: Elbląg, Młynary and Malbork, where 3 exploratory wells (Bągart-1, Kamionka-1 and Stare Miasto-1) were drilled. A horizontal leg of the latter well was hydraulic fracture stimulated. However, the results were found to be unsatisfactory and the company did not renew its concessions and withdrew from Poland in 2014. 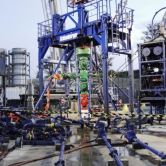 Japanese scientists develop a new technology for shale gas extraction with CO2
A team of researchers from the Kyoto University (Japan) is investigating a new shale fracturing method.