USA: shale gas resources may be much overestimated

A study by scientists from University of Texas (Austin) indicates that U.S. Government estimates of commercial shale gas reserves have been overly optimistic. The study was published by the scientific journal “Nature”.

In 2013, US Energy Information Administration (EIA) stated in its report that shale gas wells should be productive at existing rate of production for about 30 years, i.e. until the year 2040 or beyond.

However, University of Texas scientists have established that the peak of shale gas production rate may appear in 2020, i.e. 20 years earlier than expected, followed by an abrupt decline in the rate of production.

The researchers have made their own analyses of natural gas production from the four US main shale gas formations: Barnett (Texas),

The four formations account for two thirds of the total gas production in the USA.

The team of scientists published a forecast of natural gas production in the future, based not only on available geological information, but also on market expectations, including the price of gas. The conclusion is that the rate of production will be the highest as early as 2020 and the then will fall by a half until 2030.

How EIA and University of Texas team arrived to so disparate conclusions? The scientists explain that in every accumulation there are the so-called sweet spots, i.e. places with a high content of gas, as well as less productive areas. The companies attempt to locate and exploit the “sweet spots” first. Consequently, any wells drilled in the future will be less productive than existing ones. The EIA model is based on the assumption that the  future wells will be as productive as existing one in the same region, but that approach leads to overly optimistic results and conclusions – argue the researchers from Texas.

The issue of a faster than expected rate of shale gas reserve depletion may have far reaching consequences. The scientists warn that based on long-term availability of affordably priced gas, the United States and a number of other countries heavily invest in gas-dependent manufacturing facilities, power plants and means of transport.

Therefore, if the scientists from the University of Texas are right and gas production rate will start to fall in the next five years, then the outlays on infrastructure facilities and innovations may go down the drain. 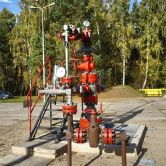