US shale revolution – a jeopardy to jobs in Europe?

International Energy Agency experts estimate that 30 million of jobs are to disappear in Europe as a result of shale gas boom in North America. Low price of gas in the USA may encourage companies to relocate their operations across the Atlantic. This may be the case of businesses from chemical, petrochemical and metal industries.

Billions of dollars worth Halliburton's profits

Shale gas exploration is potentially a very lucrative business. Halliburton, an US-based provider of services to the upstream industry, reported a profit of USD 744 billion for the second quarter of 2014. This is primarily a result of the boom in exploration and production of unconventional hydrocarbons.

US municipalities may earn as much as USD 80 billion on shale gas and oil production, with beneficial effects to the local economies. According to Energy Outlook 2014 report prepared by Jones Lang LaSalle consultants, that huge amount of money will be allocated each year to  projects in the municipalities of Bakken (North Dakota) and Eagle Ford (Texas) Formations. Shale gas and oil development areas develop at a rate twice faster comparing to other municipalities. Improvements were made to the municipal infrastructure and commercial businesses are established to cater for the migrating in workers.

West Sussex Council rejected Celtique Energie's application for a permit to deliver exploration operations in Wisborough Green (60 km southwest of London). According to local authorities, drilling operations may prove unsafe to both residents and environment. They are particularly concerned about heavier vehicular traffic near the planned drilling location and noise generated by drilling operations.

Also some environmental organisations in the UK express concerns about the safety of shale gas production. Two of them - Scientists for Global Responsibility and the Chartered Institute of Environmental Health – published a joint report on the legal status of shale gas exploration and production in the United KIngdom. Environmental and socioeconomic aspects are considered in the report. The authors believe that supervision over the operations is inadequate, especially in the context of local environmental and public health risks. They call for imposing the obligation to prepare an environmental impact assessment each time prior to the beginning of drilling operations. 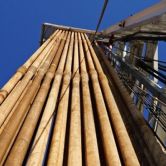