Protests against the shale gas exploration continue. Algeria plans to invest in shale gas exploration – the state-owned Sonatrach Corporation is to allocate USD 70 billion to the development of the shale gas sector in the next 20 years. However, objections of the local communities from the villages located near the planned wells in the South of Algeria are likely to frustrate these plans. The protests have lasted for several weeks and are still getting stronger.

Preparations for the third shale gas licensing round are under way. The Chinese authorities attempt to select the most attractive and prospective areas to attract foreign investors.

The next competitive tender for shale gas exploration is to be launched in the spring of  2015. The terms of conditions of the new call for shale gas exploration tenders will be ready by the end of January. Tendering documents will be based on the previous call, but changes in legislation and geopolitical situation of Lithuania will be taken into account, said Daiva Matonienie, Lithuanian Vice-minister for Environment. The new call for tenders may be announced in spring, said Jonas Satkūnas, Lithuanian Geological Survey Director, and added that the representatives of the Chinese Sinopec Company, who have visited Lithuania in the summer of 2014, have expressed a high interest in shale gas exploration in that country. Nevertheless, only formal Chinese tender may substantiate that declaration.

According to scientists from University of Texas in Austin, the U.S. Government estimates of commercial shale gas resources are overly optimistic. The results of the studies by the scientists were published by “Nature” scientific journal.

Texas-based WBH Energy, an oil and gas company, filed for bankruptcy protection. This is the first casualty of the oil price slide from the shale sector. That case prompted the concerns that more companies will be ousted from the sector at current crude prices. CreditSights Inc analysts have warned that 25 more tiny companies face a serious risk of bakruptcy. 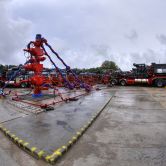 More than just shales
The latest research methods are likely to contribute significantly to the discovery of new oil and gas reservoirs across Poland.