Mr. Paweł Poprawa – ISE expert and AGH University of Technology staff member – has commented (for the Parkiet daily) on the existing status and the outlook for the next years of shale gas exploration in Poland. According to the expert, it will take five or more years to launch commercial shale gas or oil production.

The Parkiet daily Dziennik Parkiet asked Mr. Paweł Poprawa – Institute of Energy Studies expert and staff member of AGH University of Technology in Krakow – to comment on the current status of exploration. According to Poprawa, the efforts do not progress at the expected rate and investors are becoming increasingly disillusioned with the shale gas project in Poland.

Only two large international companies – Chevron and ConocoPhillips – still remain in Poland, but even they have not any spectacular success to their credit. Therefore, the companies may lose interest in shale gas exploration and withdraw from Poland. Falling oil prices worsen the already difficult situation of investors and exploration/production projects become less and less viable, emphasized Poprawa.

Quite probably, only the State-owned companies – PGNiG SA and PKN Orlen SA – will explore for gas soon – said Paweł Poprawa quoted by the Parkiet daily. Even today the two companies hold the largest number of the concessions (12 and 9, respectively). They have drilled the largest number of wells (17 and 11, respectively). In total, 68 wells were drilled and 25 hydraulic fracture stimulation treatments, of which 12 in horizontal wells, were made over more than five years of shale gas exploration in Poland.

Two years ago it was assumed that commercial production should start in 2014, but that plan proved unrealistic. According to Paweł Poprawa, five or more years of large scale exploration are required in order to assess the potential of Polish shales and begin commercial production of unconventional hydrocarbons, but even that forecast may prove to be overly optimistic. 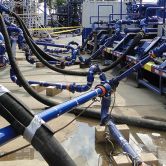