At the meeting of the Parliamentary Economy Committee held on 8 July 2015 members of Parliament heard a briefing on the prospects for unconventional gas production in Poland following recent decisions of investors to withdraw from Poland.

The briefing was presented by Sławomir Brodziński, Undersecretary of State at the Ministry of the Environment.

Members of Parliament asked questions about the prospects for Polish shales following the decision of foreign major companies to withdraw from Poland. In January 2015 the US major ConocoPhillips announced its withdrawal from operations in Poland. It was the penultimate US-based company to seek shale gas in Poland. Previously, ExxonMobil, Marathon Oil and Chevron, Talisman Energy, Total and the Italian ENI Company decided to leave Poland. Currently, BNK Petroleum (i.e. BNK Polska Sp. z o.o. and its subsidiaries), some smaller foreign companies and Polish equity-based companies (PGNiG SA, Orlen Upstream and Lotos Petrobaltic) still explore for shale gas in Poland. In total, there are 11 companies from 10 capital groups. So far, the cost of shale gas exploration in Poland is estimated at PLN 2.5 billion. There are 40 active concessions for shale gas exploration and appraisal and 13 more are in the process of evaluation.

According to Brodziński, an initial stage of exploration, a modest scale of operations, comparing to the USA, the international leader in unconventional oil and gas, as well as different geology and legislative framework in the two countries should be considered in the assessment of the potential for shale gas production in Poland.

Existing technologies and proven operating procedures, used to a good effect in the American continent, have to adapted to the European conditions. This means additional costs that, considering the current price of oil, delay the process of shale gas exploration in Poland. Moreover, according to Brodziński the interests of major international companies sometimes go astray with Poland's interests.

Considering that the LNG terminal is to be soon commissioned, rising gas storage capacities and new transborder interconnections, "Poland is not exposed to a gas risk" – said Poland's Chief Geologist and added: "Let's not shed tears over some global companies leaving Poland". They go to high investment risk countries (e.g. Iran or Libya) where corruption is high and the level of administration organisation low. They call that  "a capital investment-friendly environment".

Brodziński said he's “moderately optimistic” about the future of the Polish shale gas. "As oil prices rebound exploration technologies will become more competitive and Poland will develop its own technology (...), then we will have our domestic shale gas, (…) not at a scale of the entire Europe, but as an important component of our energy mix" – he concluded.
According to the latest report by Polish Geological Institute – National Research Institute of March 2012, Polish shale gas resources are estimated at 346-768 Bcm of potentially recoverable gas. Mr. Brodziński announced the publication of a new drilling data-based report in the fall of 2015. 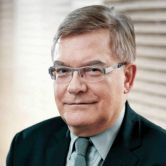 Sorry, that's the geology we have
Professor Grzegorz Pieńkowski of PGI-NRI granted an interview on shale gas issues to the Gazeta Wyborcza daily