Can Poland go in the footsteps of the US in shale gas production?

In 2013, the US were producing 7.5 Mbbl of oil per day, or 2.5 Mbbl more than just a few years before. This happened as a result of energy revolution in that country following the discovery and development of huge shale gas reserves. Are other countries, including Poland, capable of going in the footsteps of the US and achieve a similar spectacular success? According to Gregory Zuckerman, who wrote the book ”The Frackers. The Outrageous Inside Story of the New Billionaire Wildcatters”, recently published in Poland by Kurhaus Publishing in collaboration with Deloitte, this will be extremely difficult. Inadequate experience of drilling teams, unavailability of adequate infrastructure facilities, different legislation and culture are mentioned as potential barriers.

Fracking is a slang term for hydraulic fracturing – the technology that makes it possible to extract shale gas. The “frackers” mentioned in the tile of the book are US investors and industry pioneers who were the first to explore for shale gas.

In his book, Gregory Zuckerman, US economics and business journalist, has penned the success story of, among others, George Mitchell, Harold Hamm, Aubrey McClendon, Tom Ward or Mark Papa. According to Zuckerman, their stubborn efforts enabled the US to achieve that unprecedented success and be on good way to achieve energy self-sufficiency.

According to Gregory Zuckerman, George Mitchell, Harold Hamm, Mark Papa and other relentless gas and shale seekers have stubbornly aimed at the goal because they knew that devising effective shale development methods will bring them fame and make them extremely wealthy people. None of the men he's writing about in his book represented a huge corporation. Instead, they came from medium or small enterprises that were determined to develop shale gas resources.
Will the US model repeat in Poland, too? ”Small players in the US oil industry have crushed the shale rock. Hundreds, if not thousands, of them operate in the US. For quite a long time American and international oil moguls have not believed in shales. They joined the business when the risk of failure was much lower. There are only three large petroleum companies in Poland, but -sadly enough – success-hungry small and medium oil and gas companies are missing” – argues Tomasz Konik, Deloitte Partner, Energy and Natural Resource Team Leader.

The book helps readers realize the key role of technology innovations and money in the shale revolution. The shale resources would be still untapped without the flow of capital, from the US stock exchange, prior to the crisis of 2008. Moreover, US companies spend much more on research and development projects, so they have been able to improve the shale extraction technology. ”Heavy reliance on borrowed money is absolutely normal for US companies. In Europe, including Poland, the approach to debt is quite different. Our economies are much more conservative, our decision-makers are much more cautious than their American counterparts. The appetite for risk was a key factor in the US shale revolution”, said Tomasz Konik.

Furthermore, other countries lack another key factor that enabled the US energy revolution: enterprise culture and external incentives for making attempts. ”Considering the US experience, what was done so far in Poland would not permit any success in the USA. Today, we cannot say that Poland's shale gas resources have been thoroughly investigated and their potential tapped. Poland is in the beginning of that path, at the most”, said Michał Wróblewski, Deloitte Senior Manager, Tax Advice Department, Member of Energy and Natural Resource Team.

In addition, legislative systems keep USA and Europe apart. In the USA, a landowner also owns everything hidden below the ground and may transfer his/her rights thereto. This is the reason why in the United States the progress of drilling projects is faster than in countries where mining rights are government controlled.

Taking into account all these factors combined, the author of “The Frackers...” doubts whether other countries holding shale gas resources are capable of repeating the US success. In this context, he mentioned Poland, too. According to initial estimates, Poland's shale gas resources were to be in the order 5 trillion cubic metres. ”In 2010, all big players, such as ExxonMobil, ConocoPhillips, Marathon Oil, etc., rushed to Poland to buy lots, while Polish government supported the tests and was giving away exploration concessions that covered one third of Poland's territory. Before long, initially high hopes were gone. Early in 2012 estimates of Poland's shale gas resources were dramatically reduced in light of available preliminary data. Moreover, the most prospective shale beds are located more than 4800 metres below the ground in Poland and this means higher costs of production. Then it was found that mineralogy of Polish shales is different that in the US, making it more difficult to produce gas”, wrote Gregory Zuckerman. Furthermore, a lack of skilled drilling crews, underdeveloped network of gas pipelines and other infrastructure facilities are to the disadvantage of Europe. Enough to say that in 2013 there were approx. 70 operational drilling platforms, compared to 1700 of them in the USA. 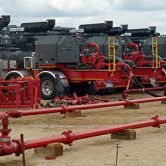