The first meeting of the recently established Working Group 1 of the European Science and Technology Network, intended to provide the European Union with as wide as possible current knowledge base on unconventional oil and gas exploration in Europe, was held on 23 February 2015. De Gasperi Conference Hall, the main conference room of the European Union located at Charlemagne Building in Brussels, was the venue of the meeting.

A large conference hosted by the European Commission (DG Research and JRC) preceded  the meeting. Various shale gas exploration and production aspects, based on U.S. and Canadian experience, as well as the planned EU research projects were showcased at the Conference.

Prof. Grzegorz Pieńkowski, PGI-NRI Director for Promotion and Cooperation, Group 1 leader, chaired the Meeting. The over 100-strong Group 1, which includes several specialists from Poland, has excellent technical background. Its members represent all major knowledge areas that are associated with exploration and environmental aspects of unconventional hydrocarbons.

All those present had an opportunity to present and share their areas of interest. The Group operates under European Commission's Mandate. Providing the EC with decision-making data is the key objective of the Group.

According to EC, the result of the Network’s efforts will be the main source of independent knowledge. In particular, databases (including environmental ones) will be of a key importance. The Chairman proposed an approach to database building, based on data from Poland, that has been initially approved.

Prof. Stanisław Nagy of AGH University of Science and Technology made a most relevant presentation whereby he proposed to launch a research project focusing on a single well, potentially in cooperation with an exploration company operating in Poland.

The issue of data comparability and accessibility was raised (as regulations vary from one EU Member State to another). The participants would expect Poland to share its experience, not only in terms of key metadata, but also to contribute with specific technical data, if any available.

The representatives of non-government organisations have voiced their views at both Conference and the Group Meeting. They claimed (with a rather defensive overtone) that they feel  being marginalised. The Chairman emphasized (also on behalf of EC representatives) that the Network is a research group and the EC Mandate does not allow it to conduct any political activity.

The Brussels Working Group Meeting clearly demonstrated the need for a proactive Polish presence by showcasing the effects of own research programmes and monitoring of diverse EC initiatives. 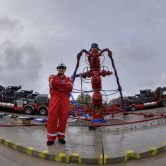