Gaz-System, the Operator of Gas Transmission Pipelines, will complete the construction of 1200 km-long gas pipelines in 2015. Expansion of the gas transmission grid and construction of interconnectors with neighbouring countries are among the key points of Poland's energy security enhancement policy.

In 2009 the Gaz-System Company has embarked on the capital investment programme intended to build over 1200 km of new gas transmission pipelines. Today, some jobs associated with the construction of the Szczecin–Gdańsk and Szczecin–Lwówek gas transmission pipelines are underway. The Gaz-System's capital projects alongside the virtual reverse flow capability of the Yamal Gas Pipeline have increased the capacity of gas imports from other than eastern directions to 90% of the total gas imports (from 9% in 2011).

Currently, the Company is implementing its capital investment programme for the years 2015 through 2020 which envisages approx. 2000 km of new gas pipelines in the west, south and east Poland. Additional 850 km of gas pipelines to be built in 2018 and 2019 are at the stage of design.

The Company plans to builds new interconnectors with gas systems of EU Member States (Poland – Czech Republic, Poland– Slovakia, Poland – Lithuania and other). On expansion of interconnections with other countries, the gas grid will become an integral part of the European gas transmission infrastructure.

The commissioning of the LNG terminal at Świnoujście and, at a later date, shale gas production will be the next steps towards energy security.

Gaz-System – the Operator of Gas Transmission Pipelines in charge of natural gas transport and transmission grid management in Poland is a joint stock company with State Treasury as the sole stock holder. 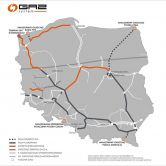