Grabowski: It is harder to squeeze the gas out of Polish shales than the U.S. ones

The Minister of the Environment Maciej Grabowski granted an interview on shale gas exploration to the POLSKA Dziennik Bałtycki daily. He emphasized the need to develop new shale gas exploration and production technologies so as to adapt them to the parameters of the Polish shale rocks. The efforts thereon, including the Blue Gas – Polish Shale Gas Project, have been conducted for the past several years.

According to the Minister, despite the withdrawal of some investors and unsuccessful exploration, the Polish shale gas project still attracts attention, as evidenced by new drilling permit requests received by the Ministry of the Environment. It is estimated that only in Pomerania the investors have spent so far approx. PLN 1 billion on exploration.

Grabowski commented on the recently published results of field tests made by GDOŚ, which  have demonstrated a lack of any serious environmental risks from shale gas exploration. In the opinion of the Minister, more and more studies indicate that hydraulic fracturing stimulation is not as risk-prone as previously presented. Germany and France begin to share that view.

Finally, the Minister commented on the protests by local communities, noting that only in one case (Żurawlów) the protests were strong enough to frustrate the project. In all other cases the dialog and openness of investors prevented social problems with drilling operations or helped to resolve them in an amicable way. 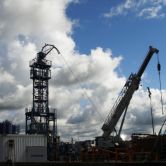