The latest research methods are likely to contribute significantly to the discovery of new oil and gas reservoirs across Poland. Specialists from Polish Geological Institute – NRI prepare a research project that will help to locate secondary conventional oil and gas reservoirs which are indirectly associated with shale gas and shale oil.

The international project being developed by the scientists focuses on the application of the latest isotopic Rhenium-Osmium methods to the identification of the sources and age of oil contained in Paleozoic rocks of the Precambrian East European Platform margin (”Application of Re-Os method to resolve problems of an age and origin of oils in the Polish Paleozoic Basin – groundwork for a co-operative project“). The research will cover both onshore and offshore areas.

Re-Os based research is intended to prove the existence of secondary reservoirs in sediments younger than lower Paleozoic shales. Scientists believe that unconventional oil and gas accumulations are the source of these reservoirs. This is associated with tectonic activity of the East European Kraton margin which is likely to cause migration of hydrocarbons from shales to younger sediments. It is vital to determine the age of that migration and relate it to the age of trap formation/sealing in younger rocks.

This new method would enable an assessment of the potential of secondary reservoirs associated with the presence of shales as primary hydrocarbon traps, so as to open new opportunities for exploration and appraisal of oil and gas accumulations. U.S. experience has demonstrated that migration of hydrocarbons from shale rock is possible and may lead to the formation of secondary conventional reservoirs. This may be equally true for Poland, as testified by the discovery of similar reservoirs near Tuchola.

As Professor Mikulski emphasized at the meeting, a long-term collaboration of the Institute with U.S. scientists in the application of isotopic Re-Os methods helped to resolve major research problems, such as the age and source of sulfide mineralization, mostly in molybdenum, gold or copper-bearing rocks located in various metallogenic units across Poland. Research results have been published in several papers and presented at international scientific conferences.

The isotopic Re-Os method can be applied to the identification of anoxic paleo-environmental conditions and sources of hydrocarbons, according to Professor H. Stein who presented North Sea  cases (”Re-Os systematics in organic material – a tool for correlation and a paleo-environmental indicator”). Professor J. Hannah presented some cases of Re-Os application to the investigation of the migration and origin of hydrocarbon (”Re-Os behavior in hydrocarbons – resolving migration histories”). Mr. H. Kiersnowski (of PGI-NRI) outlined the scope of and assumptions behind the project, while Professor M. Jarosiński (of PGI-NRI) presented the results of a study, made under the ShaleMech project, in the process of oil and gas escape and  migration from shale rocks. The attendees had an opportunity to acquaint themselves with a new interpretation and reconstruction of tectonic movements in the Polish (both onshore and offshore) margin of the East European Platform, presented by Piotr Krzywiec, PhD, of Institute of Geological Sciences, Polish Academy of Sciences.

The principles of methodology and potential scope of the planned research studies were discussed in detail. Now the scientists are trying to locate project funding sources. 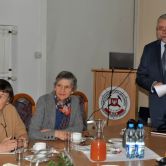 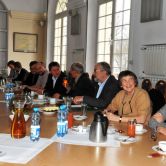 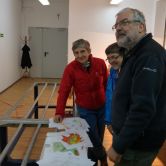 [1] The beginning or shale oil
What is the origin of oil? Level: basic