Orlen does not abandon Polish shales

In the interview, Orlen Chairman said that his company plans to invest PLN 3.2 billion in exploration and appraisal. "A detailed distribution of that amount will depend on new project appearing on the market with adequate return on investment" - said Krawiec. Four planned shale gas wells to be drilled in 2015 were stated in previous announcements of the company, which is also exploring for conventional gas.

Asked by Rzeczpospolita whether Orlen is intending to shelve the shale projects, Mr. Krawiec replied that the company does not surrender and is still carrying on the operations. However, they will approach the shale in a reasonable way so as minimize the risk.

Orlen Chairman noted that the shale frenzy came to Poland from the U.S.A. with the reports by U.S. geological services on Poland's unconventional gas resources. Initially, it was believed that the U.S. technology can be directly transferred to Poland to start production. However, this did not happen, as Polish shales are located deeper and their mechanical properties and mineralogy are other than those of U.S. shales. "Commercial gas production, if possible at all, will require deployment of a novel technology that is not applied today" – concluded Mr. Jacek Krawiec in the interview for Rzeczpospolita. 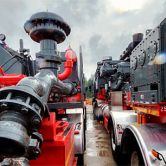