Over EUR 750 in support to Polish gas projects

The Ministry of the Economy announced that the European Commission (EC) approved support to 9 Polish gas projects in the amount of over EUR 750 million. The projects will be financially supported from the European Regional Development Fund under Operating Programme Infrastructure and Environment 2014-2020.

An increase in the capacity of gas transmission between Poland and neighbouring countries will be a key effect of the projects, contributing to the development of the Energy Union. Poland's gas transmission grid will become an integral part of the European transmission infrastructure offering gas supply from different directions. An optimized gas transmission system, higher capacities, potential gas supply from new sources (diversification) and enhanced energy security will be the key benefits from the planned projects.

The Gaz System S.A. Operator of Transmission Pipelines is in charge of project delivery.

The EC decided that the proposed projects are consistent with the EU principles of public aid. Benefits from public support to the planned projects include the fact the costs of works will not be transferred to end consumers in the form of higher transmission rates. 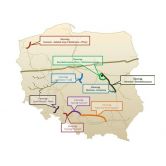 Waste management - part 2
What are the characteristics of wastes produced by shale gas exploration?