Prof.  Jędrysek, Vice-Minister of the Environment and Poland's Chief Geologist, stated in the interview that according to his estimates Polish shales contain 1.9 Tcm of recoverable gas resources. Profitability of production and exploration risk, chiefly of organizational and legal nature, is a different story.

According to Prof. Jedrysek Polish shale gas resources are not competitive, but this may change as a result of progress in technology and changes made by the government.
Poland's Chief Geologist announced that government participation as a shareholder is among the considered options.

Prof. Jędrysek has announced that a new unit is to be established: Polish Geological Service which  "will be in charge of resource policy in the context of permanent analyzes of geology, market, technology, legislation, central and local governments' needs, spatial planning, but also in charge of resource proving document approval and access to geological information (...). Knowledge gathering and making it available will be of key importance". 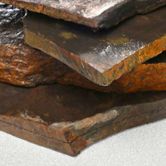