Domestic companies will commit significant expenditures to oil and gas exploration/production in 2016 – wrote “Rzeczpospolita” daily. Despite the low oil and gas prices and unsuccessful shale gas exploration projects, PGNiG, Orlen and Lotos will continue their efforts.

According to "Rzeczpospolita", Polish oil and gas companies -  Lotos, Orlen and PGNIG – do not plan to cut on exploration/production expenditures. As a minimum, it takes several years to develop a reservoir for production. Therefore, the companies do not withdraw from business but optimize the cost of operations in anticipation of international market revival and a rebound of oil prices.

According to “Rzeczpospolita”, in 2016 PGNiG will commit to exploration and production a similar amount as in 2015, when related expenditures were in the order of .PLN 1.4 billion. The company plans to drill some 50 wells (41 of them were drilled in the past year, including only 2 shale gas wells).

The daily has not provided any exact figures for the planned exploration and production expenditures of the Orlen Company in Poland. Nonetheless, the daily noted that Orlen acquired FX Energy Company, an active player in that area across Poland. According to “Rzeczpospolita”, Orlen currently produces gas  from seven fields and three more of them are at an advanced stage of development.

Lotos focuses on offshore resources, including unconventional hydrocarbons, in Polish economic zone of the Baltic Sea. According to the daily newspaper, Lotos plans to develop the B8 field by the end of 2017, while B4 and B6 fields are slated for development by the turn of 2018. 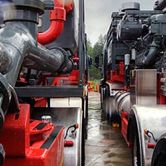