The sale of the entire interest of three shale gas/oil concessions in Baltic Basin (Cedry Wielkie, Stegny i Gotkowo) to Stena AB – a Swedish company already operating in Poland as a shareholder of Wisent Oil & Gas Company - attests to the attractiveness of the Baltic Basin as an area of exploration.

3Legs Resources, the transferring company, was focused previously on concessions that are located west of those being transferred now. These are , where ConocoPhillips is now the sole operator.

The concessions under transfer agreement are for conventional and unconventional oil and gas exploration, including in particular shale gas in Ordovician and Silurian formations.

The announcement of the transfer should be perceived as encouraging, considering Stena AB's active participation in the operations at Gołdap, Węgorzewo, Lidzbark Warmiński and Kętrzyn concessions. Two wells have been drilled at Lidzbark Warmiński Concession and one well at Kętrzyn Concession. A well in each of the concessions has been fracked.

Stena AB's experience from operations in Poland, combined with the decision to take over additional concessions located east of concessions of which Stena AB is a shareholder, attests to the prospectivity of the Pomeranian exploration area. 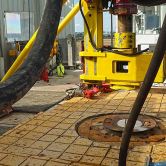