Professor Grzegorz Pieńkowski: Geology and inadequate number of wells are the reasons behind a failure to produce gas on a commercial basis

In an interview granted to the New York Times, Professor Grzegorz Pieńkowski, Cooperation and Promotion Director at Polish Geological Institute – NRI,  has specified the key reasons behind existing problems with shale gas exploration in Poland. Chevron's decision to abandon unconventional gas and oil exploration in Poland was among the events that prompted the interview.

Sixty eight exploratory wells have been drilled in Poland so far, but none of them produced gas in commercial quantities. Professor Pieńkowski pointed out at the geology of Poland's unconventional gas accumulations and on the nature of the rocks in already investigated locations.

In the United States, productive shale gas and oil formations are generally more brittle, for example due to a higher content of calcium carbonate, and consequently they are better suited to fracturing. Polish shales are more elastic and, therefore, harder to fracture. They require much higher fracturing pressures, too. Moreover, some of the shale strata contain clay minerals that tend to swell if in contact with water and block the induced fractures or pores with adverse effect on the gas flow rates, said Professor  Pieńkowski.

Professor Pieńkowski has noted that the scale of exploration efforts is quite different in the USA: the wells drilled out in Poland so far account for a minor fraction of those made in the USA. This is a key factor, as the chances for a “lucky find” are small, considering a more complex geologic environment, Professor Pieńkowski concluded.

Time to revise our expectations for shale gas resources in Poland

According to Professor Pieńkowski, in the most optimistic case, there are several isolated productive areas in Poland where the gas or oil can be produced on a commercial basis, rather than a single wide, continuous and productive shale belt similar to several US plays, as initially thought. It is a costly surprise to the exploration industry. Nevertheless, the companies that decided to remain in Poland and continue their shale gas exploration efforts are now able to focus their operations with better chances for success in the future, Pieńkowski added. 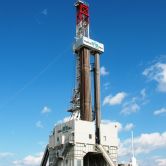 Shale gas on the EU scene – what is the role of Poland?
Shale gas production is one of the hottest issues of both Polish and European energy debate.