Report by WUG: Safety and accident rate in natural gas and crude oil exploration from 2010 to 2014

The Higher Mining Office (WUG) published a report on the safety and accident rate at oil and gas exploration in the years 2010 through 2014.

Shale gas accumulations occur in non-permeable rocks. Fractures must be induced in the rock in order to release and produce the gas at high flow rates. Fracture stimulation is used to establish pathways for natural gas flow to the borehole. These operations require a strict control to ensure safe delivery and minimize inherent risks that are associated with high pressures involved.

From 2010 to 31 December 2014, 68 shale gas exploration wells have been drilled (one well is in drilling). In 2014 alone 12 wells were drilled and further 5 wells started in 2013 were completed. Moreover, 10 diagnostic fracture injection tests and fracture stimulation jobs were made, including five 1000.0 to approx. 1500.0 m long fracture stimulation operations in horizontal legs.

Exploratory drilling (for both conventional and unconventional gas) involves natural risks such as blowout and hydrogen sulfide gas. Moreover, exploration, appraisal and extraction of mineable resources, including hydrocarbons, are associated with other risks, including:

Drilling and E&P companies reported the following accident rates in the years 2010 through 2014:

From 2010 to 2014, the following accidents at shale gas exploration have been reported:

Like in previous years, not a single case of an environmental or health hazard occurrence was reported in 2014. Thirty five audits performed by mining supervision authorities did not reveal any irregularities that would pose a health or life risk to the drilling crew.

The most frequently reported irregularities involve operation of plant and machinery in violation of applicable regulations (decisions to suspend their operations until restored to good technical condition and missing documentation supplemented), including inadequate protection of rotating parts (the irregularities have been removed on an ongoing basis).

The irregularities found have been removed on an ongoing basis. Disciplinary measures included explanatory proceedings, instructions, warning and fines.

In 2014, accident rate at conventional gas exploration and production operations was lower than in the case of shale gas exploration. Crude oil production involved a single fatal accident at work: a service company worker died while cleaning a separator tank.

In terms of potential blowout risks, Poland is divided into:

Hydrogen sulfide risk occurs in oil and gas drilling operations conducted in the Fore-Sudetic Monocline and Polish Lowlands areas when drilling through Permian, in particular Main Dolomite, formations. In fractured Dolomite reservoirs, H2S concentrations in reservoir fluids may be as high as 18%. The risk tends to decrease gradually with the progress of production and reservoir pressure gradient reduction.

A blowout and hydrogen sulfide risk was reported in 2014. A sour gas blowout occurred while drilling a tight gas well in Wielkopolska. Hydrogen sulfide concentrations have been monitored during blowout control operations. Drilling crew and the environment were found to be safe.

Ground collapse, other serious drilling hazards or failures posing a risk to the environment and drilling crews were not reported in 2014. 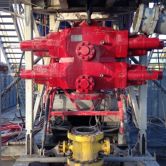 How to talk about shale gas?
From expert's opinion to the building of partner relations.