The shales are still alive

A new report on estimated resources of unconventional hydrocarbons is to be published soon. Polish Geological Institute – NRI experts are to prepare new estimates of sale oil and gas resources by the end of 2015. Unlike the 2012 report, this time the estimates will be based on the most recent data from 64 shale gas exploration wells, as well on reinterpreted data from pre-existing wells. Previous  estimates were based on data from 39 archival wells.

According to Dr. Adam Wójcicki of Polish Geological Institute – NRI, we should not expect any revolution in estimates. ”Results are similar to those published in the previous report”, said the expert at a press seminar hosted by the Institute's Information Department. However, he did not want to reveal any details before the completion of that report on the resources.

Nonetheless, it is already known that Polish shales contain more oil than previously estimated. It is also clear that Poland will not be an  European gas Kuwait. A couple of years ago Polish geologists tried to damp the enthusiasm following the enthusiastic, but geologically unrealistic, estimated by U.S. Energy Information Agency (EIA). ”U.S. basins cannot be compared to any other basins worldwide, may be with exception of Argentina. Our accumulations are more similar to the Chinese ones”, Professor Grzegorz Pieńkowski of PGI-NRI reminded at the seminar.
According to available estimates, Poland's shale gas resources most likely range from 346 to 768 billion cubic metres, while oil reserves may range from 215 to 268 million tonnes.

As emphasized by Mr. Hubert Kiersnowski of PGI-NRI at the seminar, the resources of unconventional hydrocarbons also include tight gas and coalbed methane. He reminded that an active coal mine has been demethanized in Poland for the first time worldwide under a project carried out by PG-NRI at the Wesoła coal mine in Upper Silesia and emphasized the importance of such studies to the safety of miners, as well as to the national economy and environment.

According to current estimates, potential coalbed methane resources may reach 250-270 billion cm. Extraction of almost 100 billion cm is likely to be commercially viable. Potential tight gas resources are much higher: they are likely to amount to as much as 2 trillion cm, of which approx. 200 billion cm are probably commercially recoverable.

The shale gas frenzy is behind, but the geologist do not share the pessimism reigning now in Poland. ”The gas is there in Poland and its production may prove to be commercially viable in the future”, Professor Pieńkowski told journalists.

The seminar was held on 9 November at the PGI-NRI headquarters as part of the project “Support to shale oil and gas awareness and analytical-implementation measures for energy security of Poland and environmental protection, including public participation in the licensing process". The project is financed by the National Fund for Environmental Protection and Water Management. 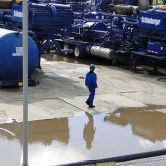