[1] The beginning or shale oil

What is the origin of oil?

There is no a simple answer to that basic question.

Today, mainstream scientists support the theory of organic origin of petroleum. Accordingly, petroleum formed from huge accumulations of dead organisms, the remains of which were falling to the bottom of ancient seas, oceans or even huge lakes.

The volume of dead organisms must be really huge in order for petroleum to be formed. The remains of all animals and plants living in the body of water fall to the bottom of the sea.

Dead bodies of marine reptiles or of the ammonites, belemnites, trilobites or graptolites, as exhibited in natural history museums, are not essential in terms of petroleum formation. The smallest ones play a key role in the formation of that important strategic resource.

This is the phytoplankton, i.e. tiny single cell organisms floating in the body of water, sometimes found in great concentrations in the upper sunlight zones. A single millilitre of water may contain as much as several tens of thousands of these cells.

In favorable conditions, where surface water is rich in nutrients – primarily phosphorus and nitrogen – phytoplankton production (i.e. mass growth controlled by the rate of reproduction) is so high that the water becomes less transparent. Huge phytoplankton accumulations that can be seen even on satellite images are formed. This phenomenon has been reported from the Baltic Sea: nutrients brought in by inflowing rivers cause massive blooms of algae and cyanobacteria so that some of the beaches have to be closed to the public.

This huge mass of phytoplankton has a double role in the process of petroleum formation.

First, dying organisms bring huge amounts of organic matter to the bottom of the sea. Accordingly, the first precondition for petroleum formation is satisfied.
However, this is not enough for triggering chemical processes that lead to subsequent petroleum formation. In order to do so, the bottom must be deficient in oxygen.

Again, it is the volume of detritus falling to the bottom that matters. Oxygen is used in organic matter decomposition processes. Therefore, if the supply of dead organisms is high enough, oxygen resources are quickly depleted at the bottom where anaerobic conditions tend to prevail. Accordingly, the second precondition is satisfied.

Now, fine remains of the phytoplankton and of other organisms that live in the body of water are decomposed with a contribution from anaerobic bacteria. Importantly, noxious products (such as hydrogen sulfide) of their metabolism precipitate the extinction of bottom organisms.

The alterations that are required for petroleum formation are described in the next article. 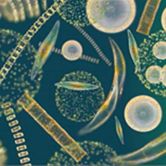 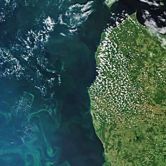 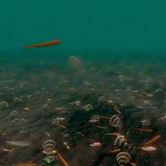 Natural gas in general and shale gas in particular
Everything about shale gas. Level: basic