[2] Alteration: how the crude oil is formed

Which processes and conditions are prerequisite for crude oil formation?

The transition to anaerobic decomposition of organic matter marks the beginning of the next stage of crude oil formation.

Anaerobic bacteria feeding triggers chemical processes that lead to the formation of chemical compounds that subsequently form crude oil in favourable conditions. Biomethane is among the products of their metabolism.

The presence of these sediments is important not only in terms of their sealing properties. Clay minerals they contain are essential catalysts for a number of chemical reactions that facilitate and expedite oil formation.

A gungy mix of dead organisms, partly altered by anaerobic processes, is covered by layers of silt and clay. This will be the source of oil in the future.

However, something else must occur in order to do so. More and more layers of silt, clay, sand and other marine sediments are deposited on the layer enriched in organic debris. Year by year, millennium by millennium, the weight squeezes the organic matter-enriched layer deep into the earth.

Pressure rises under the squeeze from increasingly thick overlying deposits. Temperature rises with increasing depth of the buried layer to 30 ºC about 1000 metres below the ground surface. This is still not enough.

As the organic matter-enriched layer reaches a depth of 2000 m, it is subjected to the temperature of  60 ºC. Chemical processes that lead to the formation of oil are triggered at this point. The process continues till the depth of approx. 4000 metres where at a temperature of 120 ºC a volatile substance – the natural gas – starts to be generated instead of the liquid crude oil.

This, however, is a different story. 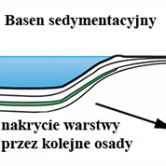 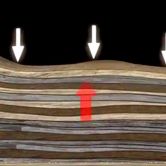 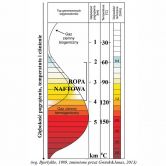