Where the shale oil should be explored for in Poland?

Early Silurian formations located at the boundary of the East European Craton are the best exploration prospects. The Craton's edge runs across obliquely across Poland from Koszalin through Warsaw to Hrubieszow and Tomaszow Lubelski. Silurian sediments in that zone have been subjected to temperatures and pressures that are required for the formation of the crude oil. This process is described in another chapter.

Based on thermal history of these rocks, Polish Geological Institute – National Research Institute designated specific areas in Poland with the highest probability of shale oil occurrence. The zone, marked green in the following drawing, covers the Baltic Basin (including the Warsaw Trough) and the Podlasie Basin.

According to EIA/ARI Report (2013), the largest estimated oil resources are contained in the shales of the Baltic Basin.

Ongoing research studies and the latest exploratory wells enhance our knowledge of Poland's Paleozoic history. As a result, continuous improvements are made in the assumptions on the range of shale oil deposits and on the volumes of oil that are contained therein.

The way how oil changed our world is presented in the next article titled: "Life after life: petroleum products".

Poland's areas with shale rocks that have reached burial depths that are required for crude oil formation (source: PGI-NRI Report, 2012) 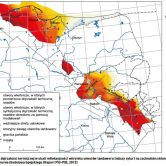 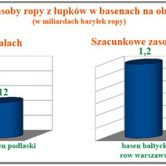